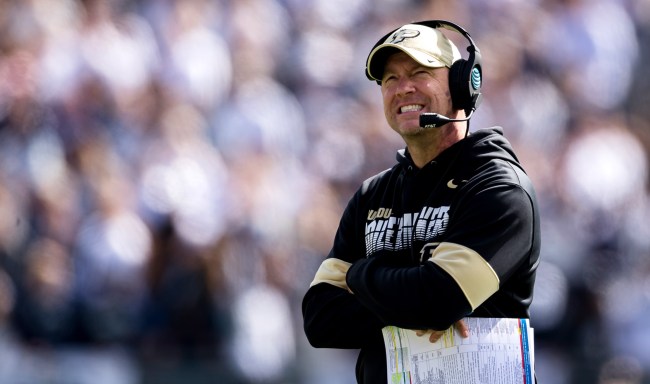 While the ACC, SEC, and Big 12 continue to maintain that their teams will be holding college football games in the fall, just like always, two of the other Power 5 conferences, the Pac 12 and Big Ten, are planning on holding off on playing games until the spring.

How they plan to do this is a mystery as it would mean players having to play two seasons in one calendar year – something former Ohio State head coach Urban Meyer says is simply not doable.

Related: Dabo Swinney Saying The Value Of A National Title ‘Doesn’t Change’ Without Every CFB Team Competing Is Moronic

“No chance,” Meyer said in a BTN interview. “You can’t ask a player to play two seasons in a calendar year. When I first heard that, I said that. I don’t see that happening, when I hear that.

“The body, in my very strong opinion, is not made to play two seasons within a calendar year. That’s 2,000 repetitive reps and football’s a physical, tough sport. So I don’t, really don’t, see that happening.

“We recruited players at Ohio State that have a chance to earn a living and play the game and be rewarded for their great efforts, and you’re going to ask them to play spring football — by the way — and then go miss OTAs and not prepare for a dream to go play in a professional football? That’s not fair.”

Don’t tell that to Purdue Boilermakers head coach Jeff Brohm. Because he has already put together a VERY detailed plan for how he would like to see the Big Ten conduct its spring football season.

#Purdue coach @JeffBrohm has put together a very detailed and thoughtful proposal for spring football in the #B1G and how it would work in fall 2021. Will have more later but here’s the overview. pic.twitter.com/2hKtArzqgJ

Brohm’s proposal outlines an eight-game season beginning Feb. 27 and finishing April 17, with postseason play wrapping up by May 15. He also outlines a slightly truncated fall 2021 schedule that would feature 10 games and begin Oct. 2 after a four-week training camp. Both plans include playoff options of four or six teams.

And yes, Brohm is aware of the problem of having players compete in two seasons within one calendar year.

The players’ health is the main concern with potentially playing two seasons during one calendar year, and that shaped Brohm’s thinking. His plan significantly reduces padded, contact practices over a two-season stretch — from 114 to 52 for teams not participating in bowl games, and from 144 to 64 for teams that reach bowls — and includes three months off after the spring 2021 season. Teams would be allowed only one padded practice per week during the season.

“The players’ health is the main concern…” Really? Is it really?

“This isn’t a perfect plan, but it will prove that it can be done if people are willing to make sacrifices,” said Brohm. “I wish we all could have been in conjunction as Power 5 conferences and done what was best for all, whether it was continue to play or back the season up or cancel. The fact it’s just a few of us right now, we have to find a way to make this work. It’s important we all put our thoughts together and do what’s best for college football and our student-athletes.”

Hmmm… why is it that after hearing his proposal when I read that last line from Brohm’s quote this is what I really see? “It’s important we all put our thoughts together and do what’s best for college football and our student-athletes.”