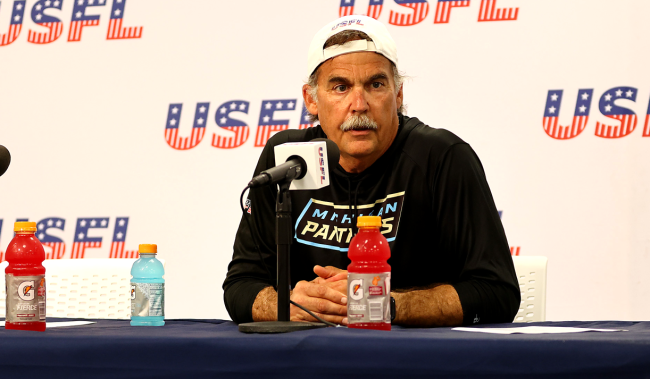 Just when you think you have seen and heard the last from former Titans and Rams head coach Jeff Fisher, he goes and does something to get people’s attention.

Since being fired by the Rams in 2016 (one week after they inexplicably gave him a contract extension), Fisher has been trashed by one of his former quarterbacks, freaked out UCLA Bruins fans when he was mentioned as a head coaching candidate, did the same to Montana State fans, and led his USFL Michigan Panthers to a 1-8 record with one week left to play with some very questionable decision making.

So, of course, the world wants to know what his thoughts are on the whole Washington Commanders, Jack Del Rio, Ron Rivera situation.

What’s that? No one wants to know his thoughts on the subject? Doesn’t matter. Fish is going to tell everyone anyway.

During an appearance this week on OutKick the Tailgate, the Panthers general manager (yes, he is also the team’s GM) spoke about Jack Del Rio being fined $100,000 for his comments on the Capitol invasion and the protests after the killing of George Floyd.

“Politics is getting into everything right now and it doesn’t need to. The Rivera and Del Rio stuff, I mean come on, give us a break,” said Fisher. “Leave that stuff alone, there’s too much going on right now.”

“I went down the middle my whole career and I respected everybody for whatever they believed in and everyone should have an opportunity to talk about what they believe in,” Fisher added. “But to create narratives that aren’t true … on first glance, I was a little disappointed with Ron. I was teammates with Ron, and for him to come out, it was like some speech writer wrote his statement. And it’s not true. There were not deaths, like he mentioned … there weren’t deaths, and he put that in his statement … just tell the truth and if you don’t know it then keep your mouth shut.”

The New York Times reported numerous deaths related to the Capitol Riot, the number of which has been disputed by many. However, there is no arguing the fact that Air Force veteran Ashli Babbitt was shot and killed by a Capitol Police officer as she and other rioters attempted to breach the House chamber. So someone did actually die. Footage of the shooting was played repeatedly on that day by every news outlet.

Many on social media took Fisher to task for misrepresenting the facts in his rant.

Jeff Fisher always strived to stay medium around .500 in every situation.

Jeff Fisher is the one who needs to shut his yap. Rivera will run his team an deal with his assistants as he sees fit. It wasn't a "dust up" and his opinion are counter to what actually happened. He's lucky he didn't get fired over it.

Jeff Fisher always seems to be wrong on most things

Jeff Fisher ran out the clock on the goal line so his punter, who hasn’t made a field goal in a game since high school, could doink a 21 yard FG. That’s just good ball pic.twitter.com/OOToljgys8