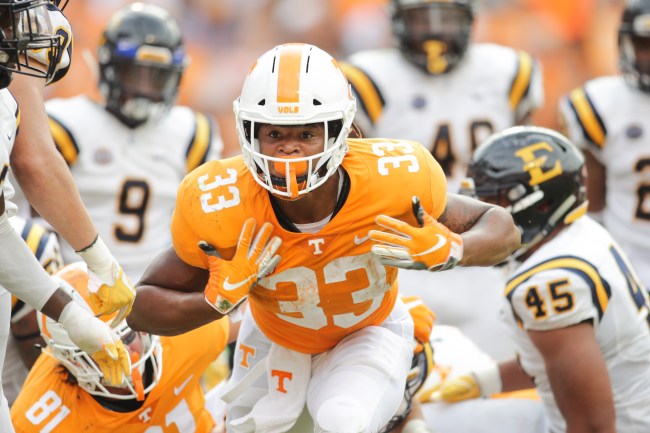 Tennessee football is in a world of hurt right now.

The Vols currently reside in the basement of the SEC with a 1-3 record, including a home loss to a Georgia State team that went 2-10 last season and the Vols paid $950,000 to play. Players aren’t taking the season seriously. And now, just days before Tennessee is scheduled to play #3 Georgia, this shit is thrust into the public eye.

Tennessee linebacker Jeremy Banks was pulled over on Sept. 15 after making an illegal U-turn. Things turned dicey when University of Tennessee police discovered Banks had been driving on a suspended license and there was a warrant out for his arrest for failing to appear in court on a citation for driving with a suspended license from July.

While sitting in the back of the police cruiser, Banks got testy with authorities, especially the woman in the front, who was an intern doing a ride along.

“Ma’am, I don’t think you want to be an intern, because where I’m from, we shoot at cops. I’m from Memphis, Tennessee,” he said.

“Police is lame, ma’am I don’t think you want to be a police, you remember what I told you,” Banks told her.

“That you were going to shoot me?” she replied.

Banks also asked what one of the officers would do without his “badge.” The officer replied “Wouldn’t be here dealing with you.”

“Y’all don’t want to see me without that badge,” Banks said in return. [via Yahoo!]

Banks told officers several times to call Tennessee head coach Jeremy Pruitt, who sounded like he had just awoken from a 10 year nap.

In six minutes, Pruitt doesn’t seem to understand that if someone has a warrant for their arrest, it is not up to the discretion of the officer to hold him or let him go.

“This is the silliest shit I’ve ever seen in my life, Pruitt said. “I got it. I understand. I worked at four places and they never had no crap like this except for here. Because the people usually say ‘hey, something’s not right here.’”

“This is the silliest shit I’ve ever seen in my life” Jeremy Pruitt pic.twitter.com/N8mNd60LOp

This piece of the transcript between Jeremy Pruitt and the Knoxville police during the Jeremy Banks arrest is quite fascinating https://t.co/CUciA3LoFT pic.twitter.com/k7UUGeN5dY

A UT spokesman said in a statement the day after Banks’ arrest that Banks resolved the traffic citation following his arrest.

Banks issued an apology through the football program on Tuesday:

“I want to sincerely apologize to my family, the University of Tennessee and the law enforcement community,” Banks said. “I deeply regret my language and attitude in the video. I have great respect for our policemen and women, and I am embarrassed by my actions that night. That’s not who I am. I promise to be a better representative for the University of Tennessee moving forward.”

Moral of the story: don’t make a mountain out of a molehill.