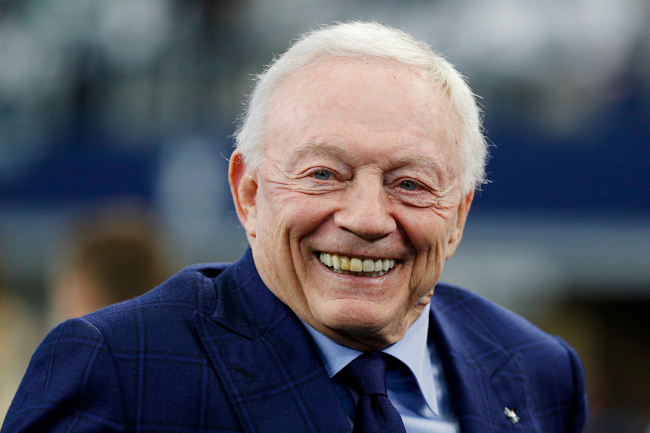 The 79-year-old owner of the Dallas Cowboys was in attendance at training camp in Oxnard, California and took some time to mingle with the fans. While he did, someone handed him a sharpie and he got to signing some of the things fans brought with them to get autographed.

And then he was passed a baby. A full-grown woman held out her (two or three year old?) child and asked Jones to sign the back of his t-shirt jersey.

Jones obliged and scribbled his John Hancock right on the back of the young Cowboys fan— even though the child doesn’t know he’s a Cowboys fan yet.

Video of the moment was as hilarious as you might expect. It is a crazy world in which we live.

Not only is the video rather funny on its own, it sparked a lot of jokes that are even funnier. Especially considering what went down during the offseason.

Back in March and April, Jones was involved in a paternity lawsuit that was eventually dropped. A 25-year-old woman sued the Dallas owner and claimed that he is her biological father. Not only that, but the lawsuit alleged that Jones paid nearly $3,000,000 in “child support” to the woman who claims he is her dad.

Jones dodged questions about the lawsuit and it was eventually dismissed a few months later.

That didn’t stop NFL Twitter from getting in their secret paternity quips as Jerry Jones signed the baby on Monday.

"Could be mine, better sign it just in case" https://t.co/7QnygLRrsB

Is this one his, too?

Is he the father of that one too? https://t.co/jMynwU4Fjf

While we all agree that the Jerry Jones paternity jokes are funny, can we also agree — as a collective society — that having someone sign your baby is weird?