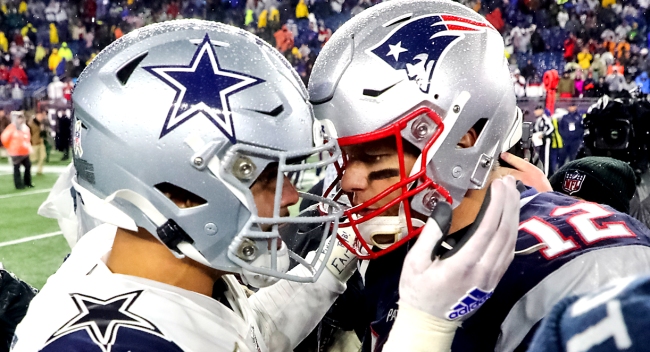 Through six NFL seasons, Dallas Cowboys quarterback Dak Prescott has passed for 22,083 yards and 143 touchdowns. His record as a starting QB is an impressive 53-32.

Through Tom Brady’s first six NFL seasons as a starting quarterback for New England, he passed 21,558 yards and 147 touchdowns. His record as the Patriots’ starter was an even more impressive 70-24.

In Tom Brady’s seventh season as a starting quarterback, he won the NFL MVP Award after passing for 4,806 yards with 50 touchdowns and just 8 interceptions. The Patriots went 16-0 that year.

Based on comments this week by Cowboys owner Jerry Jones, we could be looking at a similarly dominant season out of Dak Prescott this year, his seventh, in the NFL.

“There’s a lot of me, and of course you get in a lot of trouble every time you ever make a comparison and I know that before I say this, but there’s a lot of me that sees the excellence Tom Brady is about, how much he focuses on the nuances of the game, I see those characteristics in Dak,” Jones said during an appearance on 105.3 The Fan on Friday.

“And I see the improvement. We just want to be a part of the story of Dak Prescott as he evolves.”

Jerry Jones says Dak Prescott will be considered elite if he wins more, but right now he reminds him of Tom Brady

Jerry added that if Dak can get to the same success level as Brady “then that word elite is going to start showing up, but you got to we’ve got to win some games.”

You think? So if Dak Prescott can go somewhere around 243-73 and win more Super Bowls than he has fingers on one hand he’ll be considered to be elite?

By the way, this is not the first time that Jerry Jones compared Dak Prescott favorably with Tom Brady. He also did it after Dak’s fourth year in the league.

NFL fans, once again, in what is becoming a weekly occurrence, were perplexed and/or amused by Jerry Jones’ comments.

“Says the man who has wasted so many great careers it’s getting hard to keep count,” one Cowboys fan wrote on Twitter.

Cowboys fans appear to be getting tired of all this Dak-Brady talk from Jerry.

Or, well, any talk from Jerry.

Brady also won those three Super Bowls in his first three years in the league.

I like the last line of this Jerry quote @FOX4 https://t.co/09pCPviXas