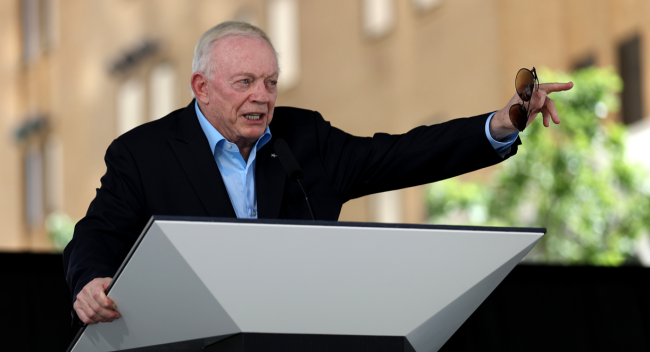 As the NFL appeals the six game suspension given to Cleveland Browns quarterback Deshaun Watson, the NFL Players Association is reportedly going after some of the league’s owners.

In the reply brief to the NFL’s appeal, the NFL Players Association has reportedly included a list of unpunished past misconduct by NFL owners including Daniel Snyder, Robert Kraft and Jerry Jones.

Jones was asked about his inclusion in the brief by Clarence Hill of the Fort Worth Star-Telegram on Sunday. He didn’t seem very concerned about being dragged into the case.

“It is a standard Players Association comeback,” said Jones. ”That is the drill. That is the drill to go around to say you didn’t punish such and such. Anybody would know that every player case and every case that involves non-players in the NFL are dealing with dramatically different principle facts, which is all the difference in the world.”

Jones is not wrong. However, according to the NFL’s Personal Conduct Policy, what he says should mean that the standards he, Snyder, Kraft and other owners are held to an even higher standard than that of players.

“Ownership and club or league management have traditionally been held to a higher standard and will be subject to more significant discipline when violations of the Personal Conduct Policy occur,” the policy reads.

That certainly has not been the case with Jones (employee voyeurism settlement), Kraft (solicitation arrest) and Snyder (toxic workplace allegations) over the past several years.

Not that the Cowboys owner is worried, he is, as always, bulletproof when it comes to such things.

“It would be like walking down to the courthouse and saying, ‘you didn’t give that guy that much’ and not take into account what the action was or the circumstances behind it,” Jones continued. “That’s called shooting volleys. That’s just shooting stuff over your back. That’s the way I look at it when I see something like that.”

NFL fans, on the other hand, were not surprised at the stance Jerry Jones is taking on the issue.

Keep talking, Jerry. Not like you have any skeletons in the closet…

Hey NFL you wanna punish Deshaun Watson to the fullest but you looked the other way with Kraft, Snyder, and Jerry Jones just BS!!!!

Unless the NFL is also going to hold Bob Kraft, Dan Snyder, and Jerry Jones to account for their own misconduct against women, it should drop its charade of outrage against Deshaun Watson. (For the record, my outrage against them all is real.) https://t.co/AQ409Rc4oU