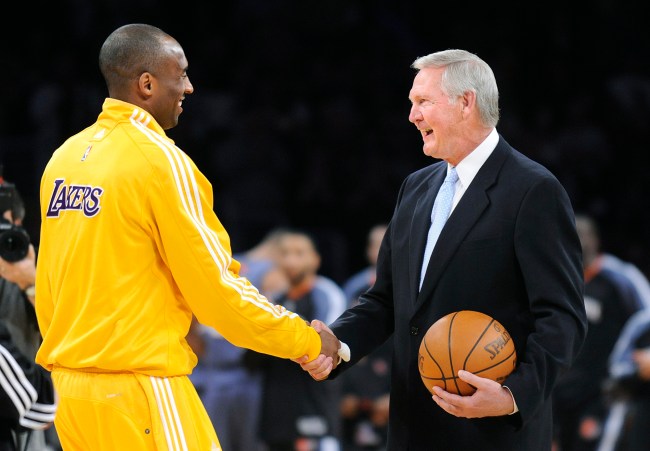 Jerry West is an NBA legend in every sense of the word. Not only did the former Los Angeles Lakers great achieve superstardom as a player — which led to his silhouette becoming the official league logo — but he’s proven to be one of the best front-office executives since his playing days ended, winning eight titles and being named NBA Executive of the Year twice.

Although West has accomplished a ton in his NBA life, the one move that he’s probably most linked to is the trade to acquire Kobe Bryant during the 1996 NBA Draft. We all know the story by now: Kobe wanted to play for the Purple and Gold, West made a deal with the Charlotte Hornets, and, boom, one of the greatest relationships in sports history was born. And, it was because of that deal that helped build a relationship between Bryant and Jerry West that was very much like a father-son.

With the unfortunate tragedy that occurred earlier this week of Kobe Bryant’s helicopter crashing — killing the former NBA star, his 13-year-old daughter and seven others — everyone’s sharing their stories about how the five-time NBA champ impacted them. In West’s case, he went on NBA on TNT to discuss Kobe’s greatness, while also revealing a never-before-told story.

The year would’ve been 2004 and Kobe Bryant was set to become an unrestricted free agent. For years, sports fans have read about how close the superstar was to joining the cross-town rival L.A. Clippers from the Lakers that summer, but, only recently, have we gotten more in-depth intel. West added more details to the whole situation with his story the other night, describing his advice to Bryant back then by literally telling him he couldn’t play for then Clippers owner Donald Sterling.

That’s remarkable stuff from Jerry West, who is currently an advisor to the Clippers, but wasn’t at the time. In fact, West wasn’t even working for the Lakers in 2004, instead leading the front office for the Memphis Grizzlies — so he was just telling Bryant as candidly as possible what he thought.

For those who forgot, Sterling was blackballed by the league 10 years later for racial remarks that were recorded and released by a former girlfriend of his. Prior to that, he had long-been rumored to have a similar tone behind closed doors, so West was just looking out for Bryant in 2004, knowing what many inside the NBA already knew about Sterling.

People are still in shock over the devastating loss of Kobe Bryant and the eight other victims of the helicopter crash. And as everyone tries to process things and mourn in their own way, we’ve been brought together in a unique way, which has led to some remarkable stories about Bryant’s impact on millions of people.