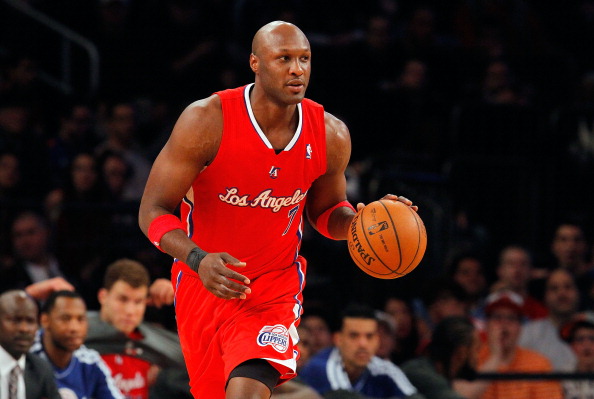 Lamar Odom recently said that he is a sex addict, cheated on Khloe Kardashian and revealed how many women he has slept with. Also this week, Lamar hinted that former Los Angeles Clippers owner Donald Sterling may have inappropriately touched him and it may have been done in exchange for more playing time.

Earlier this week, Lamar Odom did an interview with Chris Haynes for the Posted Up Podcast. Odom talked about playing with his new team the expansion Enemies in the BIG3 league. Odom will be playing alongside Gilbert Arenas, Perry Jones, Royce White, Craig Smith and Frank Robinson. Former Detroit Pistons bruiser Rick Mahorn will coach the team.

Odom also talked about his past basketball experience and gave some curious insights into former Los Angeles Clippers owner Donald Sterling. “Good guy, he was just weird,” Odom said. “The sh*t that comes out of his mouth. You don’t know where he’s coming from.”

“He always used to have weird interactions, like maybe at the wrong time,” Odom told Haynes. “Like with the players in the locker room. ‘Like dude, we got towels on… it ain’t time to touch my chest.’ He would size me up.”

“The Clippers were like known for not playing players, so you’re like, ‘Is this dude like touching me to like test me, to see if I want this extra bread? I mean how is this working out dude? But he was just an awkward dude all around. It was time to go to play for the Heat.” Odom doesn’t say that Sterling sexually harassed him, but he hints that something very weird was going on. Odom talks about Sterling around the 9:55-mark.

Odom would leave the Clippers in 2003 to join budding young stars Dwyane Wade and Caron Butler. Meanwhile, Donald Sterling would be ousted as the owner of the Clippers in 2014. On April 25, 2014, TMZ Sports released an audio recording of a conversation between Sterling and his mistress, V. Stiviano.

In the audio, Sterling told Stiviano, “It bothers me a lot that you want to broadcast that you’re associating with black people.” He also said, “You can sleep with [black people]. You can bring them in, you can do whatever you want,” but “the little I ask you is … not to bring them to my games.”

There was a public outcry to remove Sterling for his comments and NBA commissioner Adam Silver announced that Sterling had been banned from the league for life and fined $2.5 million on April 29, 2014. Sterling was also forced to sell the Clippers, the franchise that he owned since 1981. On May 29, Donald’s wife Shelly Sterling sold the Clippers to former Microsoft CEO Steve Ballmer for $2 billion.

Odom also talked about his infamous overdose at the Love Ranch brothel in Carson City, Nevada. Odom said doctors told him he is a “walking miracle” that he survived his scary overdose. Lamar said he “lost a lot of his natural abilities” such as dribbling following his “accident” at the brothel.

He said that incident was the toughest and most difficult time of his life besides his “child dying and his mother dying.” “Battling addiction is real,” Odom said. “There’s a lot of people going through it. So hopefully my story can help them push through it.”

“Being an addict is a day-to-day fight because if you take one step back and who knows what the ripple effect of that may be,” Odom said. “I have kids now and I’m living for them, it’s not about me or what I want, it’s all about them.”

“I’m fearful of dying before the time I’m supposed to expire,” Odom said. “I wanna be 80-years-old with hopefully my grandchildren sitting there watching me go.”