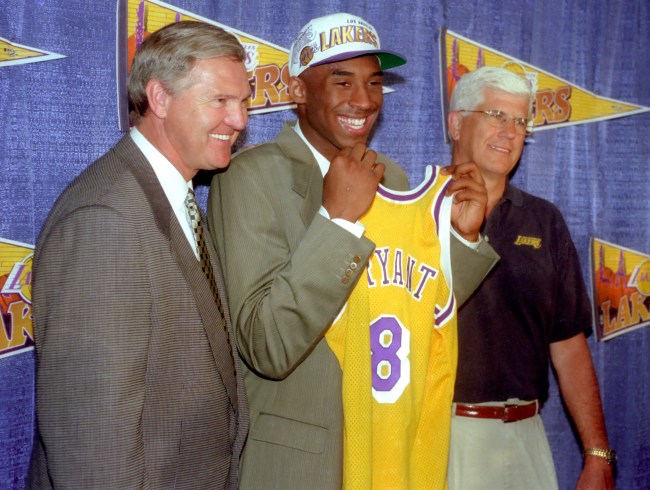 Kobe Bryant is, arguably, one of the greatest players in NBA history. The Los Angeles Lakers legend finished his illustrious career with five NBA titles, a bunch of records and individual accomplishments, and the reputation for being as lethal as Michael Jordan, who even said that “The Black Mamba” was the only player who could even compare to his own insane work habits. That’s some high praise from the GOAT.

But, as most of us know, Kobe Bryant wasn’t initially a Laker, as he was drafted in the 1996 NBA Draft No. 13 overall by the Charlotte Hornets. Of course, Bryant put up a front, said he’d never play for the Hornets and worked his way out of the small-market for the bright lights of Los Angeles. The rest, as they say, is history.

Given the tense moments between Bryant and the Hornets leading up to the trade with the Lakers prior to his rookie campaign, it only makes sense that Charlotte’s then general manager, Bob Bass, would be a little salty about the brash teenager for maneuvering his way to a different franchise. And, apparently, Bass didn’t hold back frustration; according to Bryant.

While talking to former NBA players Quentin Richardson and Darius Miles on the Knuckleheads podcast, Kobe Bryant said that Bass actually disrespected the hell out of him after the trade, which inspired the dude to work even harder to try and prove the front office executive wrong.

“We couldn’t have used you anyway,” Bass told a then-17-year-old Bryant on the phone while the terms of the trade were being finalized.

“I was triggered,” Bryant admitted to his fellow former NBA players Quentin Richardson and Darius Miles during the Knuckleheads podcast. “I was ready to go to the gym.”

This is classic Kobe, isn’t it? All the great ones find a reason to create a chip on their shoulder, and, in this case, Bryant’s was Bob Bass basically telling him not to let the door hit him on the way out.

Obviously, Bass isn’t the only person out there who pissed off Kobe Bryant enough to send him into full on Mamba mode. The guy was known for being ruthless in so many aspects of his game and mentality that he used it as motivation to reach levels most of us can’t even dream of.