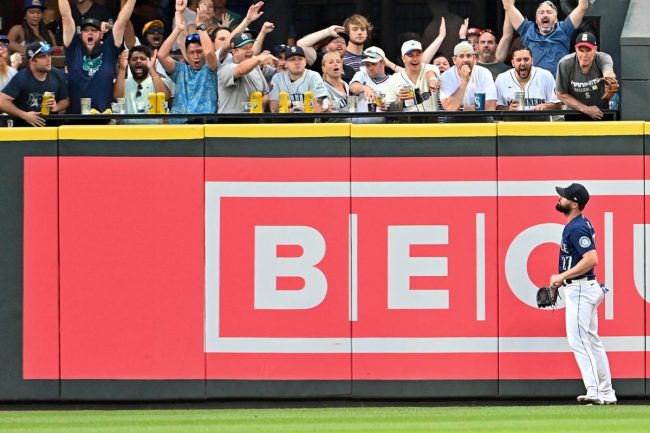 Jesse Winker is a fan favorite in Seattle. The Mariner outfielder is revered by his supporters, in many ways, due to his interaction with the home crowd.

I mean, what other Major League player has had pizza delivered to his clubhouse on behalf of a fan after starting a benches-clearing brawl?

But supporters of opposing clubs might not see Winker in the same light. I know one Yankees fan doesn’t.

On Tuesday night, in the Mariners’ matchup against New York, Winker was seen jawing with a member of the Yankee faithful. It ended with the outfielder going full on White Goodman as he taunted the viewer for wearing glasses.

Winker was seen interacting with a Yankees fan in the left field stands, calling him “four eyes” while the two went back and forth.

Winker uses a taunt right out of the Dodgeball playbook, imitating Ben Stiller AKA White Goodman in this classic movie scene.

Winker got the last laugh

The Seattle outfielder wound up getting the last laugh as his team won the game 8-6 to even the series. Winker then went yard in Wednesday afternoon’s victory to help his team land a big series win over the first place Yankees.

There’s no doubt he’ll continue to be a fan favorite among Mariners’ supporters following this three-game set.