Jessica Simpson Says Tony Romo Dumped Her Via E-Mail, Thought She Was Cheating On Him With John Mayer 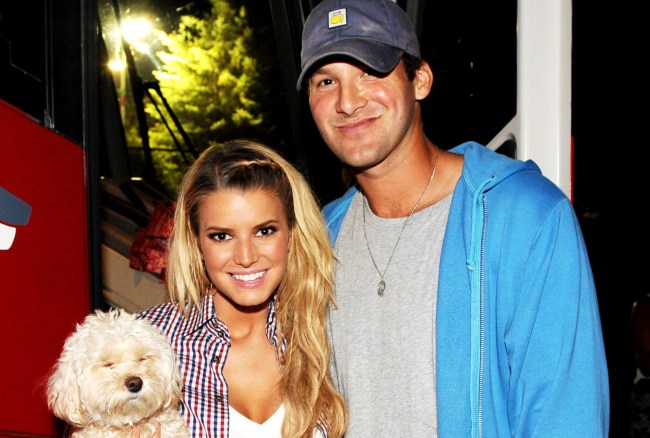 Man, remember when Tony Romo was catching hell from Dallas Cowboys fans because he took a trip to Cabo San Lucas, Mexico with his then-girlfriend Jessica Simpson during a bye week then got eliminated by the Giants in the 2007 playoffs?

Those were the days.

In fact, that whole Simpson-Romo Cabo kerfuffle was the precursor for women like Camille Kostek, Kendall Jenner and Olivia Munn to be blamed by keyboard warriors for the failures of their professional athlete boyfriends.

Romo ended up sticking with Simpson for another year or so before calling it quits, breaking up with the pop star on July 9, 2009… the night before her 29th birthday… by email.

In her new biography, Open Book, Simpson revealed Romo broke up with her because he believed she was cheating on him with her ex-boyfriend John Mayer, according to TMZ.

“[Tony] accused me of seeing John behind his back. I hadn’t cheated on Tony at all, but I could not lie and say I hadn’t even seen him,” Simpson recalled. “Tony didn’t believe that for a second. And within that second, he broke up with me right there. Two years, gone with an email. Tony soon realized I was telling the truth. Of course I didn’t cheat on him. But our breakup had been so ugly that it shocked me into realizing it had been necessary.”

Romo wasn’t completely unjustified in his concern, however, as Simpson also admitted that Mayer was trying his hardest to get back together with her.

It’s all worked out for the best, however. Simpson is happily married to former San Francisco 49ers tight end Eric Johnson and Romo, who also dated Carrie Underwood prior to his relationship with Simpson, has been happily married to 2008 Miss Missouri USA Candice Crawford since 2011.