The Jets Wouldn’t Possibly Draft Justin Fields Over Zach Wilson Because He Can ‘Handle The New York Media’, Right? 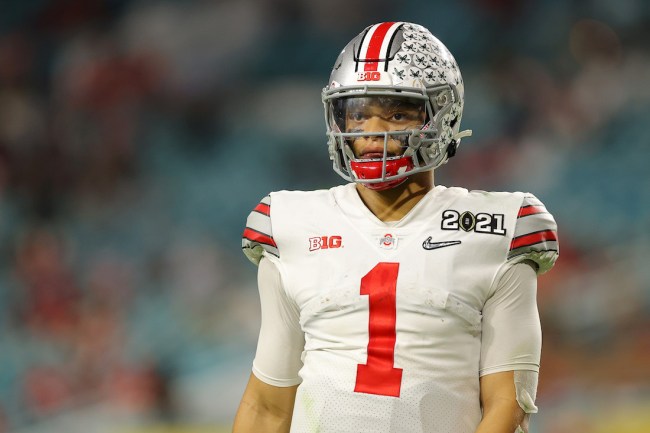 It’s kind of a big NFL offseason for the New York Jets. After firing their head coach (Adam Gase) and replacing him with a first-time head coach (Robert Saleh), it’s clear that a full rebuild is about to take place… again. Lest we forget that the same strategy was expected to be done just a few years ago under Gase, with the Jets drafting quarterback Sam Darnold No. 3 overall in the 2018 NFL Draft.

Unfortunately, none of that has gone as planned thus far, and the Jets continue to look like the worst team in the league. And with questions about what the franchise might do with Darnold — with trade rumors flying all offseason — everybody’s wondering what the team might do with the No. 2 overall pick in this year’s NFL Draft.

With the near-certainty that Trevor Lawrence will go No. 1 overall in this draft, the attention suddenly turns to the Jets at No. 2. And because there are loads of perceived franchise signal-callers available, everybody thinks the team will select a quarterback, with Ohio State’s Justin Fields and BYU’s Zach Wilson being the betting favorites to land in that spot. But how will the Jets possibly decide between the two?

According to former NFL wideout and current FS1 analyst Brandon Marshall, it’s actually not as difficult a task as some may imagine. In fact, Marshall went on national TV Tuesday morning to talk about why the Jets need to take Justin Fields over Zach Wilson, boldly saying that he thinks Fields could “handle the New York media” better. Take a look below at the video to see more.

What's the best option for the Jets at No. 2?

"The Jets have to draft a QB and trade Sam Darnold. …. This is the moment to get it right. Go get Justin Fields bc he can handle the New York media. He has all of the tangibles to lead the Jets for the next 15 years." — @BMarshall pic.twitter.com/PH6YHHIHc7

Considering Brandon Marshall once suited up for the New York Jets, maybe he’s got some weird intel into the team’s strategy for the upcoming NFL Draft. However, if at any point, team executives considered which quarterback between Fields and Wilson is more media savvy, well, they should all be fired immediately. NFL teams take guys for talent and other on-field intangibles, but handling the media better than another guy shouldn’t be an issue between two top-5 picks. It’d be a colossal mistake if the Jets used this as a reason — but, let’s be honest, it is the Jets we’re talking about here.

Once video of Marshall’s take hit the Interwebs, there were a few people on Twitter who couldn’t believe their eyes and ears. So take a look at some of those reactions below.

"Media and tangibles" says nothing. Didn't compare one actual Skill of either player.

So they draft Fields and won’t be much better than they are now. No offensive line, no wrs, no rb and weak defense. So how is drafting a qb going to fix all those holes

It's all too obvious you don't know shyt about college QB's. Go ahead and draft Justin Fields, he'll be just like every other Buckeye QB, A HUGE BUST. J-E-T-S joke joke joke

If you haven’t accepted that Wilson is going 2nd then idk what to tell you. And his reasoning in the segment was “Fields went to ohio state so he can handle it better” lol so stupid

We all know that it’s currently silly season in the NFL offseason, with teams using smoke and mirrors to throw opponents off, especially when it comes to which player an organization prefers in the NFL Draft. And since both Justin Fields and Zach Wilson are talented, it really comes down to preference for the Jets at No. 2. But thinking Fields is better equipped to handle the New York media because he went to Ohio State and Wilson “only” went to BYU is an awful take. BYU has both Steve Young and Jim McMahon as former standouts, and it’s safe to say both of those guys knew what to do when reporters came beckoning.

With so much riding on this NFL Draft for the Jets, they need to focus on the best possible football player to select at No. 2. Sure, there are other things to worry about in that decision — like leadership qualities, work ethic, etc. — but having charisma and tough skin for reporters shouldn’t be as high on the list as Brandon Marshall is making it here. But this is the draft we’re talking about, and if there’s one thing we know, it’s that teams overthink everything when it comes to this decision-making process.