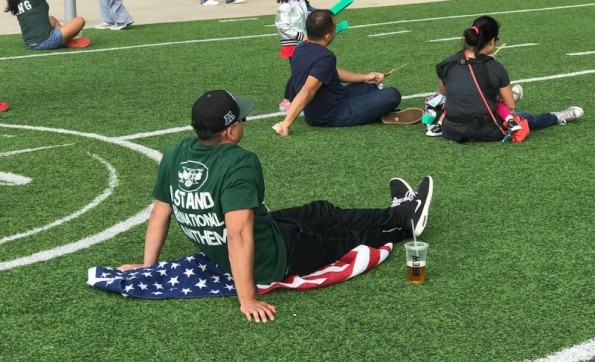 blow·hard (noun): a person who blusters and boasts in an unpleasant way. Or a dickface who defiles the flag while pretending to be Pat fucking Tillman.

Deadspin spoke with the person who took the picture. Here’s what he had to say:

Basically, me and my friend were walking around the stadium sometime during the 3rd quarter. There is a huge tv screen by the food carts right inside the stadium where people gather to watch. We went over there to check it out and we saw him spread the flag out and sit down.

I thought it was too ironic so I snagged a picture. He sat on it for a few minutes before leaving.
(noun): a person who blusters and boasts in an unpleasant way.

These people are the fucking worst. This whole anthem saga has gotten so polarizing that people are now put into two lazy buckets: 1.) a racist with no empathy for the struggles of minorities in this country or 2.) flag burning ex-patriots who are currently being vetted for a gig with ISIS. There is no in between. No common ground. You’re either with us or against us.

But this boner just created a whole new category–the Artificial American. The kind of guy who will audit everyone else’s patriotism, but when tax season comes around, will dodge Uncle Sam like the dude with a cold sore in a blunt circle. The guy who will throw up a long-winded Facebook post about respecting the flag, but when the National Anthem comes on at the stadium, he’s scrolling through Craigslist for hookers. The sad reality is that at this point, we’re all just screaming in an echo chamber. No minds will change. But, whatever your opinion is, if you’re going to be about it, BE about it. This walking contradiction can go sit on a flag pole.