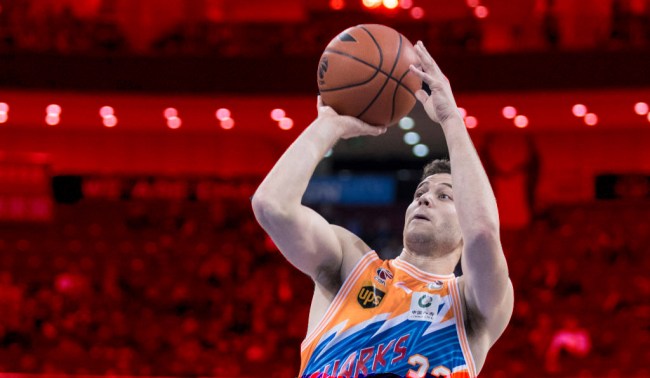 Former BYU star Jimmer Fredette, the 2011 National Player of the Year in college basketball, is still dominating the Chinese Basketball Association. The 29-year-old, who has his own signature shoe over there after winning the CBA’s International MVP Award after averaging 37.6 points per game for the Shanghai Sharks, topped his previous high of 73 points, dropping 75 on Beikong on Sunday.

After averaging only 6.0 points-per-game in 235 NBA games with the Kings, Bulls, Pelicans, and Knicks, the one-time 10th overall pick by the Milwaukee Bucks in the NBA Draft, has been en fuego over in China, following up his 37.6 ppg MVP season with a 36.9 ppg season in 2017.

And before you assume Fredette, nicknamed The Lonely God by Chinese basketball fans, was just pulling a move straight out of the Ball family playbook and just heaving up shot after shot to achieve his career high, know that Jimmer went 24-for-34 from the field, including 7-of-10 from three, and 20-for-21 from the free throw line. (That’s over 81% combined.)

Fredette also scored 40 of his 75 points in the fourth quarter alone setting a new league record.

Unfortunately, his Shanghai Sharks ended up losing to the Beijing Beikong Fly Dragons 137-136, when, after Fredette gave his team the lead with 7.2 seconds left, former Baylor star Pierre Jackson drained a game-winning three giving him an additionally eye-popping 63 points for the game.

“Absolutely sick about the loss tonight. But what a game it was! Proud of our guys for fighting back,” Fredette, who raised his average this season to 38.3 ppg, wrote on Chinese social media.