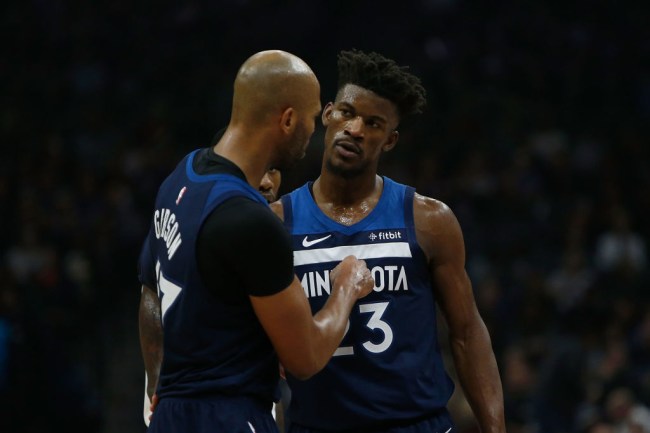 Jimmy Butler is one of the most polarizing figures in the NBA. Basketball purists love his 90s-era mentality of using bullying and machismo as a motivational tactic, while others claim he’s an egomaniac who creates a toxic work environment. An insider from Butler’s former team, the Chicago Bulls, once attributed Jimmy’s diva qualities to his friendship with Mark Wahlberg. In the fall, an anonymous NBA GM said Jimmy was once a “humble country kid who was happy to be in the NBA,” but since devolved into a guy who “drinks $4,000 bottles of wine and thinks he is LeBron or D-Wade.”

The Jimmy Buckets saga came to a head right before the start of the season when the 29-year-old showed up at Timberwolves practice after requesting a trade and reportedly annihilated the T-Wolves starters while running with the third-stringers. He reportedly mocked Wolves stars Andrew Wiggins and Karl Anthony-Townes by calling them “soft” before engaging in a sit down interview with Rachel Nichols afterwards.

Fast forward two months and Jimmy Butler has found a new home in Philadelphia, leading the team to a healthy 11-3 record since joining the team.

Current teammate JJ Redick interviewed Butler on his podcast and asked him about that infamous practice. Here is what Butler had to say, via The Ringer:

Redick: And as you and I know, these type of things as they’re happening in real time, NBA Twitter just eats it up.

Butler: It’s crazy. If Woj says it has happened, that’s the part that pisses me off. Man, Woj knows.

Redick: I would’ve liked to have been not necessarily on the court with you that day, but just in that gym. Was it uncomfortable, or were people like, “Oh no, it’s just Jimmy being Jimmy”? The way it was sort of recited in the media, it seemed that it would be a little sweaty, a little balmy in there. A little uncomfortable.

Redick: Competing. If you love to compete, you would’ve thrived in the environment. Seriously. Everybody wanted to beat me to show. The crazy part is the most interesting detail wasn’t told.

The most interesting detail of that whole scrimmage that nobody knows: I only shot the ball once.

Redick: But every quote coming out of there was like: “Jimmy was getting buckets. He was dominating.”

Butler also recognized that he has a “real problem with authority” and the reason he went off at practice is because someone in the organization tried to bully him into practicing when the constantly teased him with a trade in the offseason.

It still remains to be seen how Butler’s role will evolve with the Sixers, but if Joel Embiid’s recent comments are any indication, there’s still work to be done.