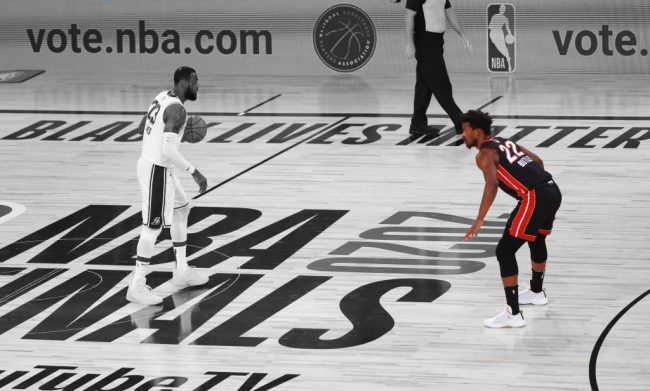 I don’t want to lie to you and pretend I’m some sort of massive basketball fan — I’m not. In fact, I’d probably say it’s my fourth favorite sport, behind football (the English kind), football (the American kind), and baseball (playoff baseball, that is). I haven’t even been watching much NBA over the last few years as I found the inevitability of the Warriors’ dominance to be objectively boring. Once they got Kevin Durant, the regular season became a mere formality — the title was theirs to lose. But ever since the NBA bubble launched earlier this summer, I’ve been watching more basketball than I have in years and I enjoyed every last game. Kudos to the NBA, because not only was the quality of play exceptional but so was the entertainment value, sagging viewership numbers be damned.

The reason I mention the breadth and depth of my NBA fandom is that I want to make it clear that my opinion on the topic of Jimmy Butler is likely far from the general consensus. But, for me, once he pushed his way out of Minnesota and only lasted one season in Philadelphia, I thought that perhaps his bark outweighed his bite. Heading into this season, he was a 30-year-old on his fourth team who averages just a shade under 20-points-per-game for his career. Was he really backing up all the shit he seemed to talk? I didn’t know. Now, I do.

The way Jimmy Butler has changed the narrative on who he is and what he’s about in these last few months has been remarkable. As I just said, he used to be the guy who I felt was more bark than bite, but now, and seemingly almost uniformly, fans have grown to love him, as he’s “somehow the only star in the league who can drop 12 in an elimination game and be the Warrior,” as co-worker Matt put it. He’s now a guy who can say things that would usually come off as self-aggrandizing lip service and have everyone actually believe him:

“This is what my team needed me to do, the organization asked of me,” Butler said following the Heat’s Game 6 loss to the Lakers. “I told them that I would win them one and I didn’t hold up my end of the bargain, so that means I got to do it next year. I told Coach Pat, I told Coach Spo I’m here to win one. I didn’t do my job, so moving forward, I got to hold up my end of the bargain.” [via ESPN]

And not only do I now believe Butler, but I’m rooting for him, too. If the Miami Heat can somehow add another star, it won’t be long until Jimmy Butler is back in the NBA Finals with the opportunity to deliver on his promise.