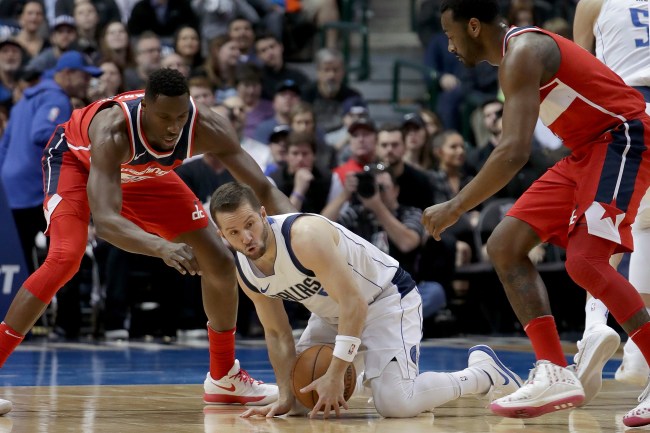 The Dallas Mavericks and the Washington Wizards have a father-son relationship. Dallas, who sucks, has completely owned the Wizards in recent years–winning a staggering 17 out of 19 games. Last night was no different. The Mavs scorched the statistically superior Wizards 98-75, amounting in the Wizards’ second-worst offensive output of the season.

John Wall, who finished with a meh 11 points after being questionable to play due to a migraine, made just one of his final 12 shots, missing all four three-point attempts. Wall decided to take out his frustration on the smallest guy on the court–J.J. Barea.

Barea was hit with a technical foul with 7:42 remaining in the game and the Mavericks up by 22. Wall and Barea got in each other’s faces after Barea committed an offensive foul and put up a shot after the whistle, with Wall smacking his arm in the process.

Asked about the scuffle with Barea, Wall snickered and said: “It was cool to me, it was funny. Just a little midget trying to get mad,” Wall said. “I don’t pay him no mind.”

When a reported relayed Wall’s dig to him, Barea called Wall a fake tough guy. Via the Dallas News:

“He was trying to be a tough guy, but he’s not,” Barea said of Wall after their fourth-quarter stare-down. “He wasn’t like that before, a couple years ago. He probably changed.

“So now I have somebody in the NBA that I don’t like. It’s my first. I don’t like him at all now. But I don’t think his teammates like him, either. So it’s nothing new for him.”

Unfortunately, Monday marked the last time the Mavs and Wizards would meet this season. Unless the 16-31 Mavs make the playoffs and advance to the Finals. Anything can happen. But not that.