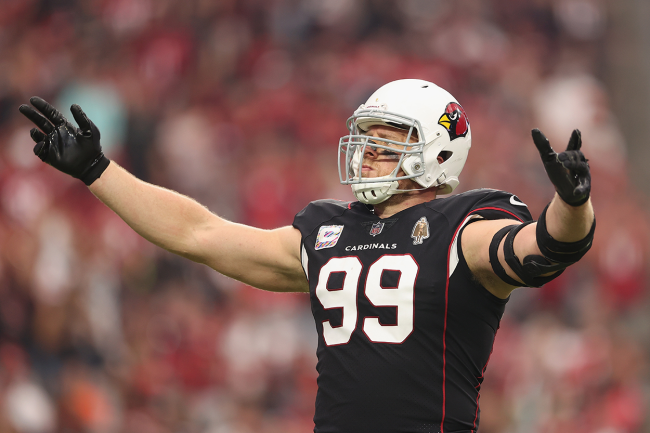 J.J. Watt is a large human being. There is simply no other way to put it.

At 6-foot-5, 288 pounds, he is eight inches and 91 pounds larger than the average American man. While his monstrous frame is no secret, one feature that may not be as obvious are his massive hands.

At the NFL Combine, when college players are evaluated prior to the NFL Draft, hand size is a huge deal. Some front office scouts value it more than others, and it holds more weight for the quarterbacks, in regard to their ability to hold onto the ball.

For non-quarterback positions, it can be an added bonus.

The largest hands in NFL Combine history are those of DeForest Buckner, who measured-in at 11 3/4 inches. Watt, when he was measured in 2011, was not far behind. He was measured at 11 1/8 inches.

The pure monstrosity of his hands were put into perspective this week when he posted a photo on Twitter.

In the photo, which is nothing special, Watt is holding a standard, 11.6 fluid ounce can of gatorade. However, it looks as if it is one of those mini cans because Watt’s monstrous mitts swallow the can right up.

it just hits different out of the can pic.twitter.com/DctNyiNiat

There is a lot of speculation about whether it was the angle, or the zoom on Watt’s photos that make his hands look so big. But after a lot of sleuthing and debate, it appears as though Watt’s hands are really just that huge.