J.J. Watt Pulls Classy Move For Fan Trying To Sell His Apparel To Pay For A Funeral 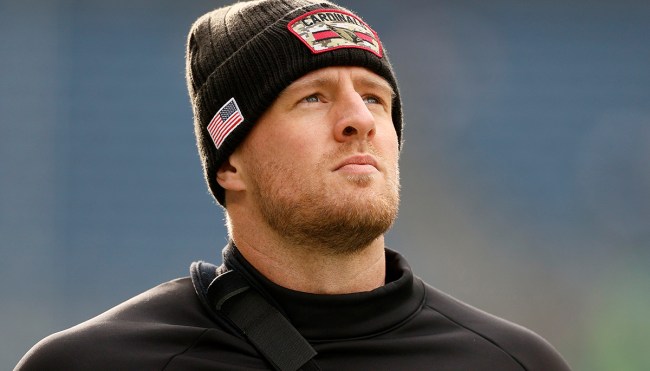 J.J. Watt has spent most of the previous decade making life extremely difficult for the many opponents who’ve had to deal with the headache of facing off against one of the most formidable defensive ends to ever play football.

However, even if you root for one of the teams he’s terrorized on the field over the years, he’s a pretty hard guy to hate thanks to what he’s done off of it.

Watt repeatedly made headlines during his time with the Texans courtesy of what he did for the city of Houston during before taking his talents to Arizona. In the wake of Hurricane Harvey, he not only helped raise over $40 million for people impacted by the disaster but personally delivered supplies and meals to those in need (he also helped a local food bank distribute one million meals thanks to the $350,000 he donated at the start of the pandemic).

He’s also repeatedly offered to help pay for funeral expenses following some awful events, including a school shooting in Santa Fe and the tragic incident that occurred at a Christmas parade just a few miles from where he grew up in Wisconsin.

As a result, we don’t really need any more evidence that he’s a stand-up guy. However, we got exactly that courtesy of a recent interaction with a fan in need of some help.

On Wednesday, Watt replied to a woman who was trying to sell a pair of his signature shoes in addition to his Texans jersey to cover the cost of her grandfather’s funeral by telling her to hang onto the apparel and offering to help pay for the burial.

Don’t sell your shoes and jersey, we’ll help with the funeral.

I’m sorry for your loss.

Like I said: JJ Watt is a good dude.