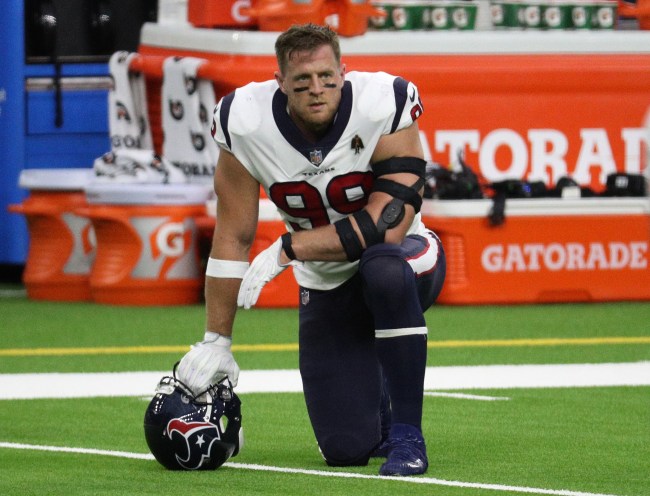 The Houston Texans are an absolute mess, and, despite playing a difficult schedule early on this NFL season, the team knew it had to do the one thing to wake up the entire organization: Fire head coach and general manager Bill O’Brien. But will getting rid of O’Brien really change the season for the Texans? I mean, there’s been one team in NFL history that’s reached the postseason after an 0-4 start — so the climb to become the second is steep AF.

Who the hell knows how the rest of the Texans’ season ends up, but, at the very least, it appears that one of the team’s stars, J.J. Watt, is happy with the decision to ax O’Brien and bring a new day to the franchise. Now, I’m not one claiming I know what’s going on in Watt’s head, but, shit, it’s hard not to read into the cryptic photo he posted on Twitter Tuesday morning and not think it’s related to the team’s decision to move on from Bill O’Brien. Take a look for yourselves below.

Maybe that beautiful sunshine picture that J.J. Watt posted was nothing. Maybe it was meant to show that the roof at the Texans’ stadium is open and it’s a great day for football. Or maybe it’s a shot at O’Brien, telling fans that it’s a new day and that the sun is shining over the franchise — and some of the incompetence that’s been happening will finally come to an end. Who knows… but NFL fans sure think it was the three-time Defensive Player of the Year shitting on his former head coach. See how people on Twitter were reacting to the photo from Watt.

JJ the day after Bill O’Brien is gone pic.twitter.com/TBPsZibiNZ

I can see clearly now the Bill is gone!!

That feeling when your boss is finally held accountable ☀️

He said a new beginning😂😂😂😂

If I’ve ever seen a picture indirectly talk about something, this would be that picture. Seeing as this picture perfectly illustrates “a new day in Houston” pic.twitter.com/991FwLjO52

A breath of fresh air from all the inmates 😌 #FreeAtLast pic.twitter.com/jK3yz9y1G1

O’Brien, who had his fair share of criticism during his seven-year run as Texans head coach and general manager — like trading All-Pro wideout DeAndre Hopkins this past offseason and being incapable of taking a talented roster beyond the Divisional Round during his tenure — is now gone, and, if you really want to read into this J.J. Watt photo as a metaphor, it sure seems like guys on the team feel like they’ve had a huge weight lifted off their shoulders.