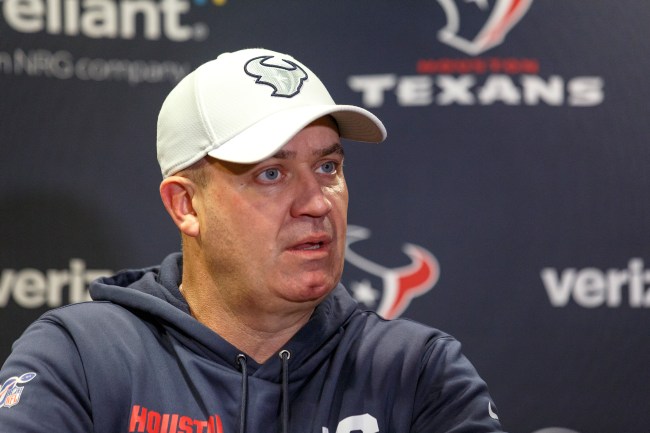 The NFL offseason for Bill O’Brien has been dramatic, to say the least. The Houston Texans head coach and general manager, who’s entering his first season in the dual role, has seen success with the X’s and O’s — with his team reaching the playoffs in four of his six seasons — but, when it comes to making executive decisions, well, O’Brien’s getting tons of criticism.

Just think about this: In the past eight months, Bill O’Brien has had his hand in the trades of guys like Jadeveon Clowney — a former No. 1 overall pick — and, the real kicker, DeAndre Hopkins, who the head coach/GM swapped for an aging and injury-prone running back, David Johnson. And when O’Brien tried defending the biggest move by simply saying Hopkins was asking for a pay raise and reportedly had poor practice habits, fans ripped the excuse to shreds after seeing the team’s salary cap change significantly with some of the recent additions.

Oh, and if that weren’t enough, O’Brien has been absolutely trashed by at least one former player of his, as wideout Jaelen Strong ripped the head coach for ruining his career, only adding fuel to the fire for fans who are going in on the guy. But, there’s a line that should never be crossed — and sending death threats certainly constitutes that barometer.

According to Jay Glazer of FOX Sports, some Texans fans are doing just that to Bill O’Brien over his recent trades, though, with the longtime reporter detailing his thoughts on the disgusting attempt to bash the head coach.

“Bill O’Brien has gotten thrashed this offseason. I know that people have sent threats his way. C’mon people, it’s just football! Let’s not send death threats or any violent threats toward anyone in any sport. It’s just sports. It’s supposed to be escapism.”

Just look at what some people are saying on Twitter about O’Brien.

I promise I will kill Bill O’Brien. My hatred of this man give my life purpose

if bill o’brien doesn’t contract covid-19 and die there is no god https://t.co/5AHNlJn6U5

If Corona doesn’t kill Bill O’Brien I will

As Glazer put it, sports are supposed to be escapism, and, although we don’t have live events right now due to the worldwide pandemic, it doesn’t mean we should all waste time by sharing our frustrations on social media — especially since we lived in a fucked up world and who knows if any of these whackos are serious with the threats or not.

Obviously, most Texans fans are upset over Bill O’Brien’s decisions in the past few months, so there’s only way way to make good and shut up all the haters and threats: go win big whenever the NFL season comes back. But, in the meantime, can we all just top with the threats, guys?