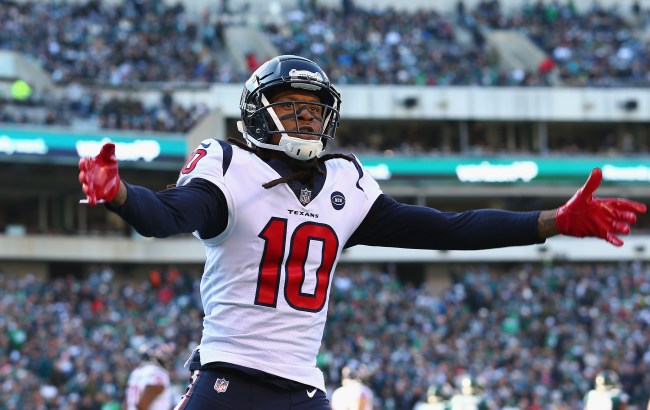 The DeAndre Hopkins trade a couple of weeks ago from the Houston Texans to the Arizona Cardinals shocked the entire sports world. Not only did the Texans trade a four-time All-Pro selection — three of which were of the First-Team variety — but also a 27-year-old superstar who was just entering the prime of his career. Considering the fact Hopkins is already presumed to be the top player at his position, that’s saying something.

Despite all the accolades and possibilities of Hopkins going on to become a Hall of Famer — yes, that’s how great he is right now — the Texans decided he wasn’t worth it to them to sign to a mega extension, and reports surfaced there was more than just a new contract demand that led them to get robbed in the swap with Arizona.

According to Michael Irvin, DeAndre Hopkins and Houston head coach Bill O’Brien had a huge rift, with the latter claiming to be upset with the player’s “baby mama’s” hanging around the team, while also bringing up a convicted killer, Aaron Hernandez, during a one-on-one meeting. That report from Irvin was maybe more shocking than the trade itself, and, while there were plenty of reactions from former Texans players claiming O’Brien treated plenty of players poorly, Hopkins did his best to downplay everything, first tweeting his appreciation for the organization and then reiterating his respect for his now former head coach.

Although that seemed to be the end of the drama surrounding DeAndre Hopkins and the Texans, now there’s this: That the Texans were reportedly fed up with the wide receiver’s practice habits, and how he didn’t seem to set an example for less talented players during the week leading up to games, per Sports Illustrated‘s Albert Breer. Here’s what the longtime NFL reporter had to say.

“There was friction with Hopkins inside the organization, and really it had everything to do with Monday-to-Saturday. On Sundays, he was exemplary. The rest of the week, his practice habits (he didn’t practice much at all) became a problem, and because he was such a big star he had the ability to carry teammates in the wrong direction—guys who might not be able to turn it on come game day as easily as he could. And that was, if not easy, manageable. That said, it’s one thing to keep a guy who may not totally align with the program on an existing contract. It’s another to reward him with a new contract with three years left on that deal, and have to handle the message it sends to the locker room. And those intangible elements, by the way, are central to how EVP Jack Easterby is trying to help O’Brien rework the organization.”

Whether the Breer report is true or not, it’s another bad look for the Houston Texans. Who knows if DeAndre Hopkins really was going half speed during practice and not setting an example for other players, but that’s not his job. He’s supposed to dominate on game days and that’s exactly what he did. If this contributed to the team trading Hopkins to the Cardinals for an oft-injured running back (David Johnson) with a bad contract and a pair of middle-round draft picks, it speaks to the incompetence of both Bill O’Brien and the team’s ownership — who, presumably, would have signed off on the trade.