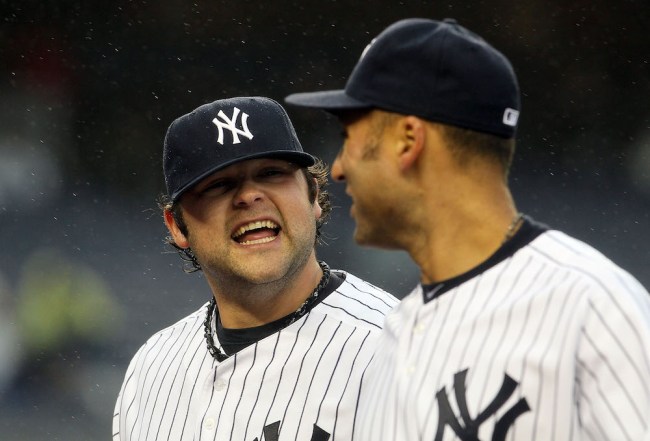 Fenway Park is a tough place to play for opposing players. The Boston faithful are rough on guys wearing any jersey other than the Red Sox.

Hell, they’re tough on their own fans too.

Chamberlain now hates the song so much because of his playing days that his friends and family terrorize him with the tune to this day.

On a recent episode of the Balk Talk podcast, Chamberlain opened up about his time in the major leagues and how the Neil Diamond classic gets him angry as hell.

Ugh, the worst. And the worst is my son and his buddies terrorize me.

Legitimately, they’ll play it on their phones. We were having a end-of-the-year watch party or something at one of my bars or restaurants and they played it on the jukebox and I lost my mind. […]

Is it catchy? Yes. I won’t deny that. But at the same time, I had to hear it all the time, every time I came into the game against Boston. I don’t want to hear it.

Chamberlain’s hatred of “Sweet Caroline” makes sense considering the song is played in the eighth inning of Red Sox home games, typically the time Chamberlain would be called into a tight game.

“Of course, you’re going to hear this damn song and you’re like ‘All right…’ And you try to block it out, but you can’t because all the fans go crazy. I won’t take anything away from the song, but I can’t stand it.”

Chamberlain also discussed the state of the current major league bullpens. Chamberlain said when he was on the Yankees roster, only himself and Joel Zumaya could hit 100 on radar guns. Today, if a reliever can’t hit the high 90s, he’s not even considered for the position.

“When I came into the game, there were only two dudes throwing 100 [mph], it was me, and Joel Zumaya. Now — it’s like, if you’re not throwing 100, they’re like ‘What are you doing? You’re not even part of this bullpen.’”

Chamberlain was selected in the first round of the 2006 MLB draft and played 9 years in the majors with four teams – Yankees, Tigers, Royals, and Indians. He retired at the start of the 2017 season.