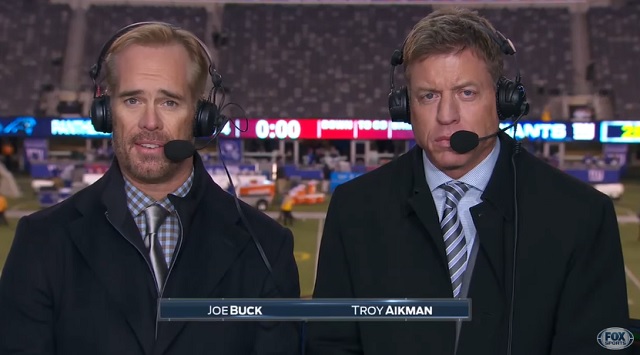 Joe Buck isn’t the worst sports announcer on the planet, but, unfortunately for him, he gets a bad rap for being so painfully difficult to listen to. It’s not that he stumbles over his words or talks about random info during the game — looking at you, Jason Witten — but it’s that he’s dry AF, often giving viewers no excitement whatsoever while watching sports. Hey, we want to feel that drama, and Joe Buck just fails to give it to us.

With so many people aboard the Joe Buck hate train, the good fellas over at Total Pro Sports just had to burn the FOX Sports commentator with a pretty spot-on example of the guy’s boring announcing skills over some badass Madden NFL plays. Whether it was a long touchdown run by a guy like Marshawn Lynch or a deep pass from Drew Brees for a score, the video below shows just how awful playing Madden would be with Joe Buck on the mic.

Joe Buck’s dubbed voice of these Madden plays is the perfect burn, guys. As I said earlier, the guy just doesn’t seem to get excited about big plays as much as we probably think he should as a viewer. Give us the passion and wildness of Gus Johnson, or the classic “bang” after a huge shot in the NBA Finals from Mike Breen; those are the guys who make watching sports fun. Joe Buck makes a game sound like you’re watching it with your grandpa in his basement on matching flannel recliner’s as he drinks Miller High Life.

Considering Jow Buck calls, oh, about 50 percent of the biggest games in sports — from the top NFL games to the MLB Playoffs — it’s kind of a bummer we don’t get more excitement, but, hey, guess it’s just his style. Just once, I’d love to hear Buck go apesh*t during a play, though.