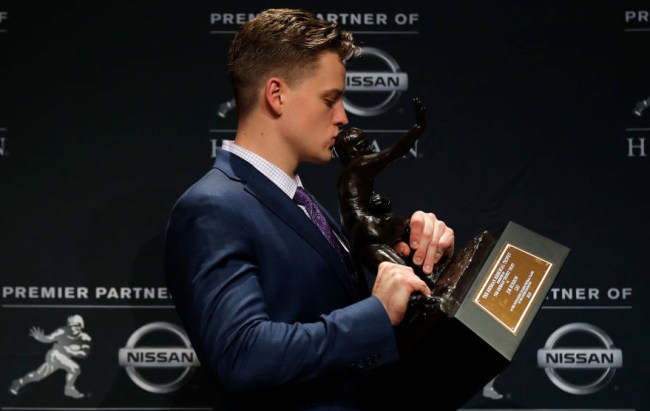 There was little doubt who was going to take home this year’s Heisman Trophy heading into the award ceremony on Saturday night, and after garnering 99.8% of the vote, Joe Burrow walked away with one of the most prestigious awards in all of sports.

There weren’t many people who expected the LSU quarterback to win the honor ahead of the season but there was one person who thought he had at least some potential: Matt Porter, who threw down $50 on Burrow to take home the iconic hardware and walked away with $10,000 thanks to the longshot bet.

After learning he’d won, Burrow took to the podium and delivered an incredible speech while holding back tears and reflecting on the path that led him to that moment, and after mentioning the impoverished conditions many people in the area he grew up in are forced to grapple with, he sparked a flood of donations that have surpassed the $350,000 mark as of this writing.

However, it appears Porter is also in a bit of a giving mood, as he spoke to Sports Illustrated and announced he’s planning on donating $3,200 to a GoFundMe devoted to helping Colton Moore, and LSU fan living in Alabama who is battling spina bifida.

The GoFundMe was set up earlier this year to give the nine-year-old a chance to meet Ed Orgeron, and after he got to link up with Coach O during a trip to Baton Rouge this fall, his family is now trying to raise money for a handicap-accessible van.

Porter said he received a number of offers to cash out before Burrow was named this year’s Heisman winner but that he never lost faith in the man who would eventually become the favorite as he led his team to an undefeated regular season and the top seed in the College Football Playoff.

Porter says he’ll make about $7,000 after taxes thanks to his bet and will be giving $1,000 to his father in addition to his donation to Colton’s cause. While there’s no guarantee the Tigers will make it to the national championship game, he said he’s setting the rest aside to pay for a trip to New Orleans if they do.