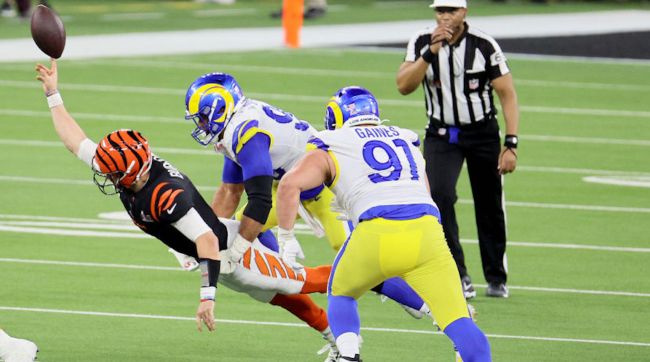 After just two seasons in the NFL, Cincinnati Bengals quarterback Joe Burrow was able to lead the historically moribund franchise to this year’s Super Bowl, a game they ultimately lost to the loaded Los Angeles Rams.

Despite how stacked the Rams were with talent, though, the Bengals almost pulled off the upset as they had the chance to tie the game or take the lead late in the fourth quarter. Their attempt at a miracle Super Bowl-winning drive was stopped short, though, as the Rams were able to turn them over on downs with a crucial 4th-and-1 defensive play.

The play — which saw future Hall of Famer Aaron Donald take Burrow down behind the line of scrimmage — was designed for stud wide receiver Ja’marr Chase to run a “Go” route. And it worked. Chase was wide open on the play, but Burrow just didn’t have time to get him the ball.

Joe Burrow, who recently removed his knee brace, says he “anticipated” throwing to Ja’marr Chase on crucial 4th-and-1 in the Super Bowl

Speaking to reporters for the first time since the Super Bowl this week, Burrow discussed the play and admitted that he “anticipated” throwing to Chase but didn’t have enough time in the pocket to get the throw off.

“I checked to that go route,” Burrow said. “I was anticipating throwing it, just didn’t quite have the time. Like I said, we’ve put this behind us. We lost, we had a great year, we’re going forward.”

Ultimately, Burrow was tackled on the 4th-and-1 play by Donald, which sealed the Los Angeles Rams’ 23-20 victory over the Cincinnati Bengals in Super Bowl LVI.

Currently, sportsbooks have the Cincinnati Bengals tied with the San Francisco 49ers with +1400 odds to win next year’s Super Bowl, which makes the AFC North champs one of the top six favorites to lift the 2022-23 Lombardi Trophy. Ahead of the Bengals are the Kansas City Chiefs, Buffalo Bills, Dallas Cowboys, and the defending champion Los Angeles Rams, who boast odds of +1000.