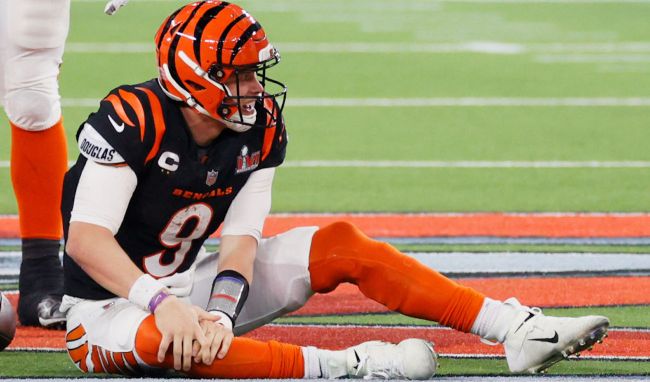 Heading into Super Bowl LVI, one of the main talking points was how the Cincinnati Bengals’ relatively porous offensive line would handle the Los Angeles Rams star-studded defensive line.

Perhaps unsurprisingly, that matchup turned out to be one of the key components of the game as the Rams racked up seven sacks of Burrow, which is the most ever in the Super Bowl.

On the seventh sack during the fourth quarter, Burrow’s knee got twisted up in the pile, leading to a pretty visceral reaction shot of Burrow screaming in pain, leading many fans to believe he’d be done for the game. The second-year signal-caller ultimately returned to the huddle for the following drive, though, as he told reporters he simply “wasn’t coming out” of the biggest game of his life.

“He’s a warrior, a pure warrior, a stone-cold killer,” Bengals cornerback Chidobe Awuzie said of Burrow returning to the game. “We all know that and I think the whole world is starting to understand that.”

Rookie kicker Evan McPherson also praised the former Heisman Trophy winner, adding that it “just shows Joe’s toughness and his willingness to never give up.”

Despite the valiant effort, Joe Burrow and the Bengals lost Super Bowl LVI to Matthew Stafford, Aaron Donald, eventual MVP Cooper Kupp, and the rest of the Los Angeles Rams by a score of 23-20. Burrow completed 22 of 33 passes for 263 yards and one touchdown. He was also sacked seven times, which is a Super Bowl record.