Joe Burrow Says He’ll Spend His First NFL Check On A Private Chef, Explains His Thoughts On Playing For The Bengals 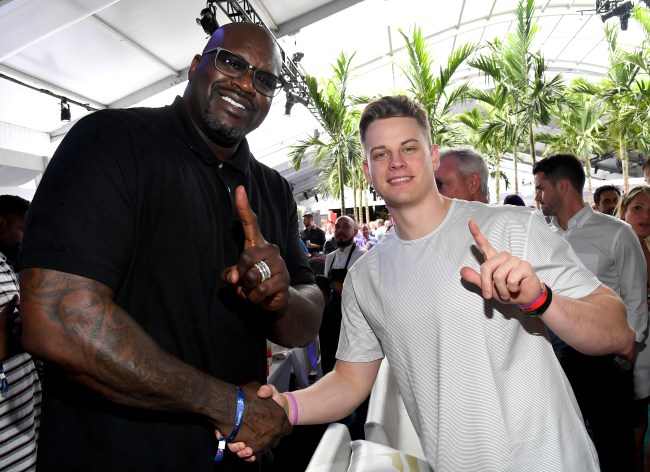 Joe Burrow’s on top of the world right now. He won the Heisman after transferring from THE Ohio State University to LSU. He won the Tigers a National Championship against Clemson. And now Joe Burrow‘s expected to become the #1 overall NFL draft pick and be taken by the Cincinnati Bengals.

Joe stopped by the Fanatics Super Bowl LIV part in South Beach after Fanatics was forced to make a last-minute venue change due to weather. The party was one of the premier events from Super Bow LIV weekend in Miami with A-List guests including Post Malone, The Chainsmokers, Peyton Manning, CC Sabathia, Dan Marino, Shaq, Robert Kraft, A-Rod, Kevin Hart, Meek Mill, and countless others.

As he walked down the red carpet into the venue, Joe Burrow was stopped by TMZ Sports where they asked him if he was cool with being drafted by the Cincinnati Bengals, what advice he has for the next big star at LSU, and what he’ll spend his first NFL check on.

Without even missing a beat, Joe said he’ll spend his first NFL check on a personal chef and listed what he wants that chef to make, how he prefers his steak, and more. Here’s the clip with some text of the interview below:

I don’t know about you guys but I could barely hear the TMZ interviewer over that Rae Sremmurd track playing in the background. I could make out most of Joe’s answers clear as day but I had a ton of difficulty hearing the specific questions that we were asked.

It kicked off with him being asked if he wants to play for the Miami Dolphins because they’re ‘here in Miami’? Joe responded with “I’ll play for whoever wants to have me. It’s an honor to be in the discussion for anything.” From there, he was prodded on whether or not he’d want to play for Cincinnati, here’s what he had to say:

I’ll play anywhere. You know, we both have processes to go through. They have theirs and I have mine. So who knows what can happen

Joe was then asked about Shaq’s son, UCLA transfer Shareef O’Neal, visiting LSU where his dad played and if Burrow had any advice for ‘a big star going to LSU.’ Joe said “you know, it’s different. It’s different down in Louisiana. You got to adopt that culture and they’ll love you forever.

From there, the conversation switched over to how Joe Burrow would spend his first big NFL check and he didn’t even skip a beat before responding ‘personal chef’.

I’m not a sushi guy. I’m a healthy eater. Whatever he/she can make that tastes good and can keep me shredded.

If you got a good steak you don’t need A1 sauce. Just straight steak.

Joe’s right. A good steak requires ZERO sauce. If you’re feeling adventurous you could order some sort of compound butter (garlic butter, etc) on the side and dip one or two bites but you should never, under any circumstances, put sauce on a great steak.

It is an interesting answer though because when he’s working with the team in pre-season through the season he pretty much has an on-site chef. It’s really just dinner that the personal chef would need to cook for a large chunk of the year and a period of time that will coincide with his first few NFL checks.

My prediction is he’ll buy a watch or car shortly after asking someone in his family to hire a personal chef for him but he’ll actually make a tangible purchase before the chef is hired. Only time will tell…