Tiger Woods’ Caddie, Joe LaCava, Didn’t Hold Back His Enthusiasm When Asked If He Was Interested In Working With Golf Legend 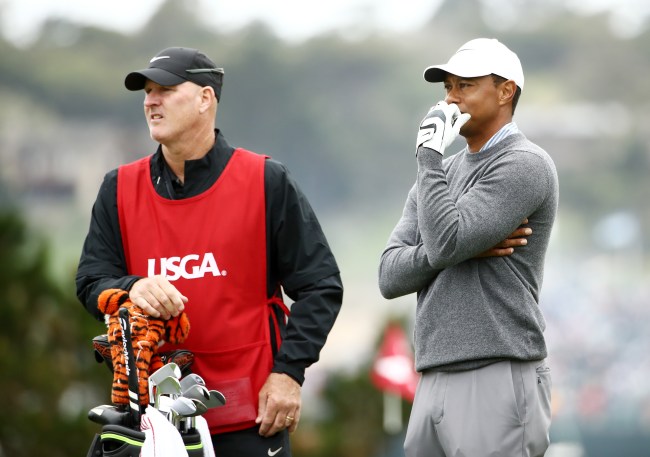 Joe LaCava has a dream job, in my personal opinion. While most of us shlub through work and just hope we don’t fuck up bad enough to get canned every single day, this guy’s living the dream out on a golf course with, arguably, the best golfer to ever grace God’s green earth, Tiger Woods. It’s legit LaCava’s duty to assist the 15-time major champ in every aspect before, during an after a round, which, while demanding, has to be pretty awesome.

Since Joe LaCava is an absolute boss when it comes to being a golf caddy, the dude was inducted into the Caddie Hall of Fame the other day, which, like yourself, I was shocked to find out even existed. Still, pretty dope honor for Joey to be mentioned with the all-time bag carriers who came before him.

And now that LaCava’s carrying around the bag of Tiger Woods, he can reveal lots of things about his boss — as the two often do online — as well as be as 100 percent candid about things relating to Woods. One of those stories? LaCava’s reaction when Tiger asked him if he’d be “interested” in being his caddie in 2011, which Joe LaCava described during his induction speech the other evening. Check it the video below, which highlights Woods’ reaction.

When Tiger asked Joe to be his caddie… pic.twitter.com/bLyXPdKN3C

This is hilarious, because, dudes, who the hell wouldn’t be interested in caddying for Tiger Woods? Sure, when LaCava was asked about joining Tiger, the golfer hadn’t won a major in three years, was battling physical ailments that left his golf career in jeopardy, and, you know, he was trying to repair his image after that whole sex addiction thing, but you’d be a moron to turn down the opportunity — and Joe LaCava is no idiot, so he jumped at the chance.

At the time Tiger asked LaCava to join him, the caddy was working with Dustin Johnson — so it’s not as if he was working at the local country club hoping for $5 tips or anything — but saying no to Tiger Woods would’ve probably been something Joey would’ve regretted, no matter the amount of success that DJ has had in the past few years. Working with Tiger was clearly a once-in-a-lifetime opportunity, so LaCava didn’t hesitate in holding back in enthusiasm when asked to do it; which makes for a great story when he retells is like he did the other night.