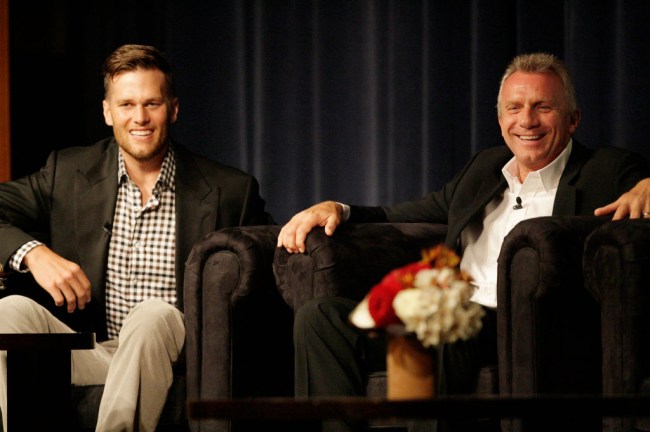 The New England Patriots made an appearance in half of the Super Bowls played in the previous decade and took home three Lombardi Trophies in the process, but this year, they were forced to play in their first Wild Card game over that same span of time and were unable to end the 2010s on a high note after losing to the Titans.

While Tom Brady once again defied the critics who proclaimed this would be the year he’d finally fall off, the Patriots were far from the dominant force they’ve been in years past and it was clear the legendary quarterback wasn’t thrilled with the offense he was working with.

There were reports concerning Brady’s dissatisfaction over the entire course of the season, but back in October, Adam Schefter dropped a bomb when he suggested the Patriots dynasty was on the verge of collapsing and revealed he believed TB12 was open to playing for another team when his contract expired.

The speculation has only increased since New England was eliminated from the playoffs, as Brady said there was a very slim chance he’d decide to retire following the season-ending loss and there have been a number of rumors since then concerning potential destinations as he prepares to meet with other teams.

The Patriots are obviously doing everything in their power to prevent Brady from defecting as he weighs his options and attempts to secure the salary he feels he deserves, and while he may not be willing to give New England the hometown discount he has in the past, one of his idols is encouraging him to make sure money isn’t the only factor that plays into his final decision.

Last month, Brady paid tribute to Joe Montana in an Instagram post after the two men were named to the NFL’s All-Time Team and acknowledge the impact the former 49ers quarterback had on him when he was growing up.

Montana is best known for his legendary career in San Francisco but his playing days eventually came to an end after spending two years with the Chiefs before hanging up his cleats in 1995.

Last week, Montana sat down with Michael Silver for an interview that will air in full ahead of the Super Bowl on Sunday and offered up some advice for Brady concerning a potential move to a new team while warning him of the challenges that would come with such a transition:

“It’s not easy to go to another team and get accepted, no matter how much success you’ve had and how many years you’ve played.

They still want to see you come in and be the same player and be that loyal to them as you were to the other team you just left. So, it’s not easy [for] guys looking at that change, especially at the quarterback position.”

Montana also noted he had an easier time adjusting to Kansas City’s offense because the Chiefs had signed a coach he worked with in San Francisco but says Brady likely wouldn’t have that luxury and would subsequently have to deal with more adversity.

Only time will tell if Brady takes Montana’s advice into consideration but it’s certainly going to be a very interesting offseason.