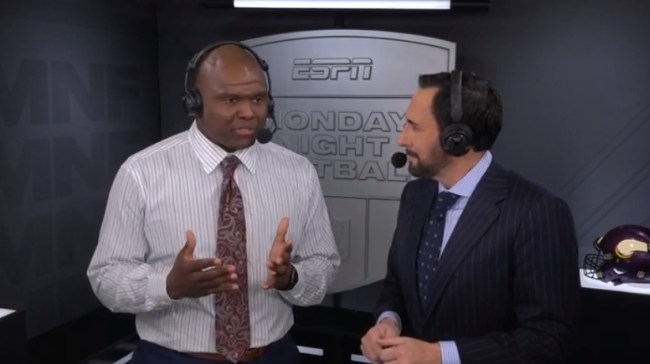 The Joe Tessitore/Booger McFarland era of Monday Night Football seems to be officially over.

According to sports media reporter Richard Deitsch, sources within ESPN confirmed to him that both Booger and Tessitore were out on MNF and will be repositioned elsewhere within the company.

Apparently, ESPN is looking internally for Booger and Tessitore’s replacements and the main candidates for the job are Louis Riddick, Dan Orlosky, Steve Levy, and fan-favorite Pat McAfee.

At the top of the list are football analysts Louis Riddick and Dan Orlovsky, “SportsCenter” anchor-turned announcer Steve Levy, and former punter and fast-rising media personality Pat McAfee. Like nearly every company, ESPN and parent Disney have been hurt financially by the pandemic.

The Walt Disney Company has ordered execs from the vice-president level on up to absorb pay cuts of 20% to 30%, while ESPN has asked its top 100 highest paid on-air talents to accept 15% pay cuts for three months. Throwing money at an outsider might not go over well internally at Bristol.

“When you’re asking your top 100 people to take a haircut, how can you go out and pay Kurt Warner $5 million?” asked one source. “That would be a very tough sell.”

Fans reacted on Twitter after learning that McFarland and Tessitore weren’t returning next season.

Booger McFarland is officially not returning to the MNF booth. Let us rejoice pic.twitter.com/AOKoGs8Hiu

Booger: I am leaving ESPN Monday Night Football
Also Booger: That means I will not be commentating any monday night football game pic.twitter.com/BMWNst1xQV