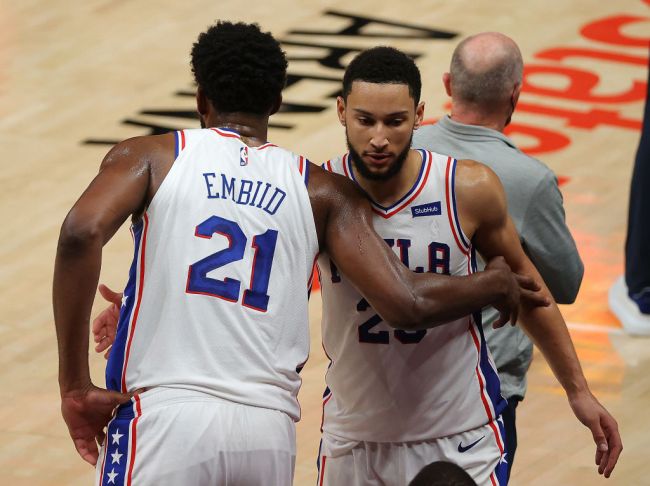 After one of the worst playoff performances by a player making above the veteran’s minimum in recent memory, Ben Simmons is treating his soon-to-be former team like he just found out they look nothing like their profile pictures.

The 25-year-old demonstrated a complete lack of accountability and respect when he put the kibosh on his Sixers teammates’ plan to fly cross-country to hash it out.

“Weird, disappointing, borderline kind of disrespectful” is how Joel Embiid classified Simmons’ botched breakup with the only NBA team he’s ever known.

“So I feel like our teams have always been built around his needs,” Embiid told reporters after practice Thursday. “It’s kind of surprising to see, for him to say that. Even going back to the reason we signed Al … we got rid of Jimmy [Butler] which I still think it was a mistake … [Simmons] needed the ball in his hands.”

Embiid’s comments come in the wake of a recent report by Sam Amick of The Athletic alleging the crux of Simmons’ desire to leave Philly was over his belief that the duo’s on-court relationship had “run its course” and Embiid was little more than a roadblock disallowing him to get into the paint, the only area of the court Simmons thrives in.

Look at Embiid all in Ben’s way 🤣 pic.twitter.com/0g8LorfbSm

Given the way Simmons has handled (or lack thereof) the situation, it’s amazing how reserved Joel Embiid’s been in response. Save for this subtle but strong dig.

In the end, Embiid doesn’t really need to talk that sh*t. The internet is happy to do it for him.

Need Embiid to not take the high road for once and absolutely drag Ben. Just completely ether him. My body needs this.

Embiid said Ben Simmons is a proven loser that will never succeed pic.twitter.com/n5QQrI1uLH

"We still hope he changes his mind"

Joel Embiid if Ben Simmons does end up changing his mind:pic.twitter.com/P0KvTivI4r

Best of luck to Simmons and the rest of the Shanghai Sharks on a successful season this year.