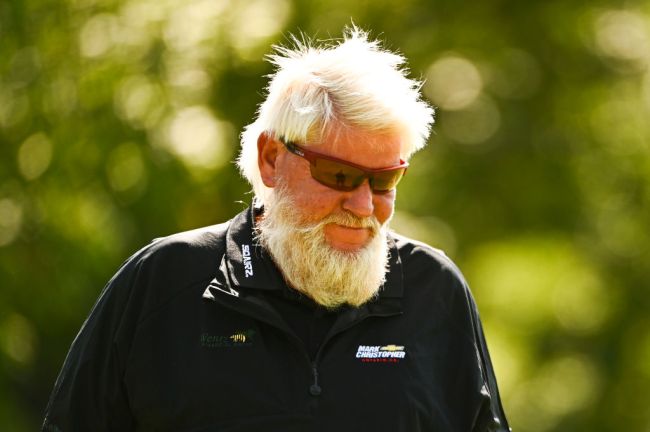 The Arkansas Razorbacks basketball team made a run to the Elite Eight in 2021 and are looking to take it one step further in 2022 and beyond. To do so, head coach Eric Musselman is hitting the recruiting trail like crazy.

He added a five-star shooting guard in the offseason and tapped the transfer portal for three former four-star guards and a three-star small forward. His class of 2022 commits include three four-stars and is currently ranked No. 2 in the Southeastern Conference.

All of this goes to say that the Muss Bus is rolling.

As the quest for a national title in Fayetteville continues, one shooter in particular has caught they eyes of many. His name is John Daly.

The 55-year-old golfer showed up to the Razorbacks’ practice on Monday and showed of his sniper range. Sporting an oversized t-shirt, a pair of basketball shorts and slides, Daly pulled up from just inside the arc and drained a deuce on his first time.

There are very few things that Daly can’t do. Whether it’s hurling a first pitch into the stands, releasing his own album, making barefooted holes-in-one, having a heart attack and keeping the party going, or draining buckets in slides— Daly does it all.

Of course, after dropping dimes, Daly had to swing by and chop it up with the head man.

Always a great day at the office when you get a visit from @PGA_JohnDaly! pic.twitter.com/vlV2oiHRzP

The picture on the right is pretty hilarious. Daly is 5-foot-11, while the guys around him are at least 6-foot-3.