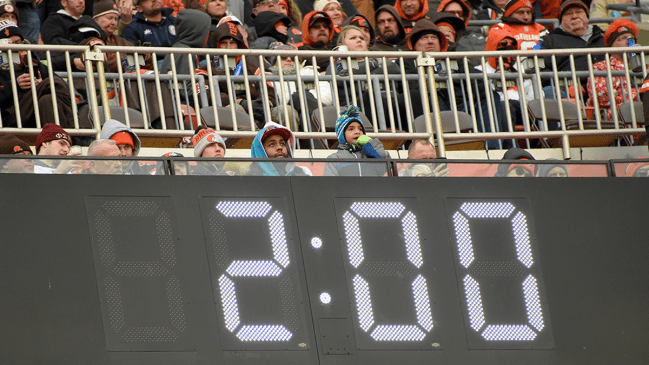 The vast majority of NFL fans expected the Broncos to walk away with a victory over the Seahawks on Monday Night Football, but Seattle was able to defy the odds (and spoil Russell Wilson’s homecoming in the process) by eking out a 17-16 victory to kick off the season.

The Seahawks got a bit of help from Broncos head coach Nathaniel Hackett, who caught plenty of heat over some fairly baffling decision-making toward the end of the contest.

Denver had four minutes to get the score they needed to take the lead, and Wilson was able to lead a drive that resulted in the Broncos facing a fourth-and-five on the opposing 45-yard line with a little over a minute remaining in the game. There was obviously no guarantee the team would be able to convert on the play, but you could argue Brandon McManus had an even slimmer chance of converting the 64-yard field goal attempt he ultimately failed to make while sealing the deal for the Seahawks.

After the game, Hackett attempted to justify his thought process with a fairly nonsensical statement that arguably made his decision to put his faith in McManus instead of Letting Russ Cook even worse, saying:

“I was expecting to have to go for it. I thought Javonte did an incredible job to put us into field goal range and at the mark we were looking for.”

It’s worth noting the Broncos also had all three timeouts prior to taking one after milking the clock and sending out the field goal unit, and Peyton Manning was far from the only person who questioned the decision to use them in the manner Denver did.

Hackett is obviously far from the first coach to fall victim to the kind of questionable clock management that makes even the most casual fan scream “WHAT THE HELL ARE YOU THINKING?” at their television, and after the game, former Memphis Grizzlies executive John Hollinger used the moment to advocate for a fairly unconventional solution he thinks more coaches should turn to in order to address those woes: playing video games like Madden or NBA 2K.

People think I'm crazy when I say this, but I've long argued that coaches should play video games to get reps on late/close decisions. There's still stuff in NFL/NBA that is obvious to gamers but real life coaches struggle with. https://t.co/nV17svs79m

It’s certainly not the worst suggestion in the world, but there are a couple of issues that stick out.

The most glaring is that it’s hard to imagine any coaches would willingly dedicate the time that could be spent reading scouting reports, watching tape, and doing Other Coach things to playing video games.

The other problem is that this solution hinges on the assumption that coaches would even be able to grasp the controls in the first place or conquer the learning curve to a point where they can compete at a level where a game is close enough to require clock management in the first place.

Feel free to accuse me of ageism, but I don’t think it’s too much of a stretch to assume the vast majority of current coaches wouldn’t call themselves “gamers”; as of last year, the average NFL head coach was in their late 40s, and after discovering no one has bothered to give NBA coaches the same treatment, I ran the numbers and determined the current class clocks in at an average of 51 years old.

With that said, Madden does offer a “Coach Mode” (an option that’s absent from the latest installment of NBA 2K), and while it’s doubtful the Hacketts and Andy Reids of the coaching world will take advantage, there’s always a slim chance they’d benefit.