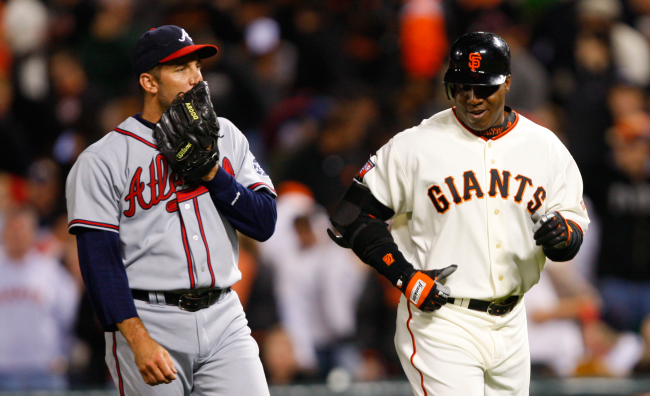 During Sunday’s Yankees-Indians game on MLB Network, Hall of Fame pitcher John Smoltz shared a great story about all time home run leader Barry Bonds getting some crazy revenge against him for a perceived slight.

During his career, Smoltz was tied with his teammate Greg Maddux for giving up the most home runs to Bonds with nine. Smoltz also holds the record for allowing the most walks to Bonds and is tied with Maddux for striking him out the most. This was not one of those better days for him.

According to Smoltz, one year at the All Star Game during the Home Run Derby, Bonds thought Smoltz was rooting for Cardinals slugger Mark McGwire to beat him.

Related: Hall Of Famer John Smoltz Recounts A Great Story About The Time He Threw BP To Tiger Woods

“He said, ‘I’m going to do a pirouette at home plate.’ And I said, ‘Alright, you can do that.’ I said, ‘Hey, more power to you. But if I strike you out I’m going to sit down on the mound.

“So I forgot about it. It’s September, we got the division wrapped up, we’re playing in San Francisco. He hit two, two home runs. So there’s nothing else I could say.

“After that, he came on the bus looking for me. ‘Where’s Smoltz? Where is he?!’ I’m trying to crouch down… ‘I told you! I told you I was going to get you. And then he goes, ‘Alright guys, go get the ring.’

“I lost. Because of those two home runs.”