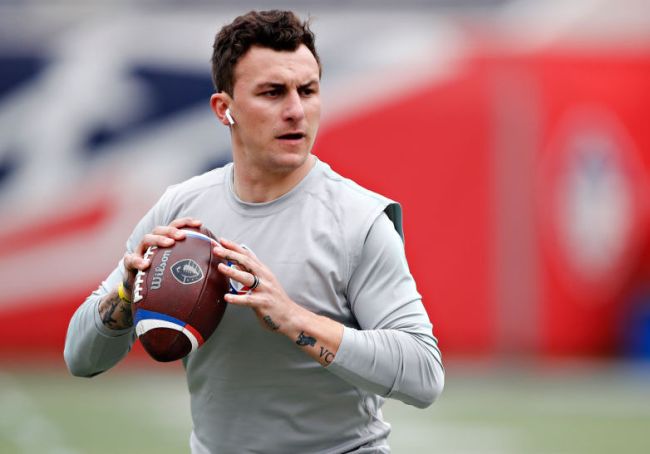 It’s been over two years since Johnny Manziel announced the commencement of #ComebackSZN after flaming out of the NFL due to the slow-motion car crash that unfolded during his two seasons in Cleveland.

While he attempted to take whatever talents he had remaining to Canada in 2017 after being unceremoniously released by the Browns, he wasn’t able to secure a CFL contract until the following year. The deal contained some clauses related to treatment for the mental health issues he’s struggled with, but after failing to meet them, he found himself without a home yet again.

History repeated itself when 2019 rolled around when he joined the Alliance of American Football only to be dropped from the roster after the league stopped having rosters entirely when it folded after a whopping eight weeks. While he reportedly tried to land a spot in the XFL, the commissioner responded to his request with a hard pass, but in the end, it didn’t really matter, as Vince McMahon’s rebooted league somehow cratered quicker than it did the first time around.

As of this summer, it seemed like Johnny Football was officially done with the sport and was content to spend the rest of his days cyberbullying Darren Rovell by repeatedly shoving him into a virtual locker on Twitter. However, it appears #ComebackSZN is making a comeback, as the quarterback has signed with yet another upstart league in the form of Fan Controlled Football.

If you somehow aren’t familiar with the FCF, the new league is sort of like one of those Twitch streams where a bunch of people try to beat a Pokémon game. However, in this case, fans are given the chance to vote from everything from uniform designs to the plays that are called during games (which I can only imagine will result in Manziel being subjected to more Four Verticals than your average Madden matchup).

While the league technically played its first season in 2017, it’s followed in the footsteps of the XFL by rebooting itself and plans to kick things off in February, where it will attempt to avoid to suffer the same fate of most alternative leagues to come before it while Manziel tries to prevent this newest endeavor ending the same way as all of his previous ones.