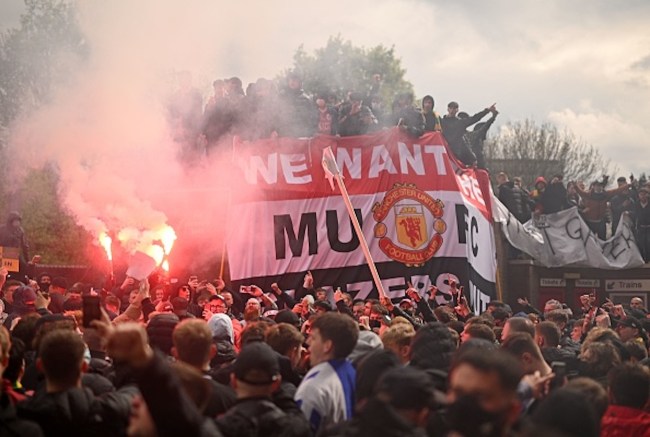 As if our world wasn’t already plunged into enough chaos, the greedy powers-that-be at the top of European football took it upon themselves to make things unequivocally worse by announcing the formation of the Super League in mid-April. But while the Super League itself was short-lived — the attempted heist lasted less than two days — its impact remains felt and will continue to be felt for the foreseeable future, as the move has ignited a rage in fans the likes of which the game has never seen.

On Sunday, thousands of Manchester United fans gathered outside the team’s stadium, Old Trafford, and the team’s hotel, the Lowry Hotel, ahead of their match against Liverpool, touted as the biggest game in English soccer, therefore making it one of the most important matches in the world.

The game was ultimately postponed, though, as hundreds of fans broke into Old Trafford, invading the concourse, the field, and even the locker rooms.

More so than the actual Super League, Manchester United fans were protesting the owners who signed them up for it: the Glazer Family, who also own the Tampa Bay Buccaneers. The Glazers have owned a majority share of Manchester United for about 15 years now, and in those 15 years, have overseen the club’s descent from Premier League, and world soccer powerhouse, to occasional Top 4 contender (it should be noted they are currently 2nd in the Premier League table, albeit 13 points behind Manchester City).

Because they occasionally pretend to care about sports leagues not named the NFL or LeBron James, ESPN brought in-house soccer commentator Jon Champion onto to SportsCenter to speak on the protest, however, some fans believe that they cut Champion off mid-rant as he was railing against the Glazers, their handling of the club, and the idea of a sports “franchise”.

Jon Champion was speaking up his mind about the Glazer ownership of the club and ESPN cuts him off halfway through. "Land of free speech". Gotta protect the poor billionaires. Disgrace. #GlazersOut pic.twitter.com/zs88wgyDHK

ESPN has since claimed the incident was caused by “technical difficulties”, but naturally, fans aren’t buying it, likely due to the network’s ties to the NFL (and therefore the Glazers) and MLS, which employs the franchise business model that Champion was in the midst of shredding to pieces.

🚨 Commentator Jon Champion was abruptly cut off on American network ESPN on Sunday whilst talking against the Glazer family amid the postponement of yesterday's match. ESPN have commented it to be a technical malfunction #mufc #mujournal

fuck espn for doing this man. jon champion is a phenomenal pundit, props to him pic.twitter.com/wnmyWa3M0D

ESPN IS A DIRECT PARTNER OF THE GLAZERS (AS THEY ARE NFL OWNERS), THATS WHY THEY CUT JON CHAMPION OFF THE AIR . SHAME ON ESPN!!! #GlazersOut https://t.co/VyiEAUlfUo

Jon Champion being critical of American owner and franchise model on ESPN, is cut off mid sentence for whatever reason and they run a promo for Nashville vs [plastic MLS franchise name redacted] incredible timing lol https://t.co/IcGl8gNBlF

I really think it's kind of important that Jon Champion, who does play by play for MLS on ESPN, explicitly rejected the MLS model on air https://t.co/iutgBRsara