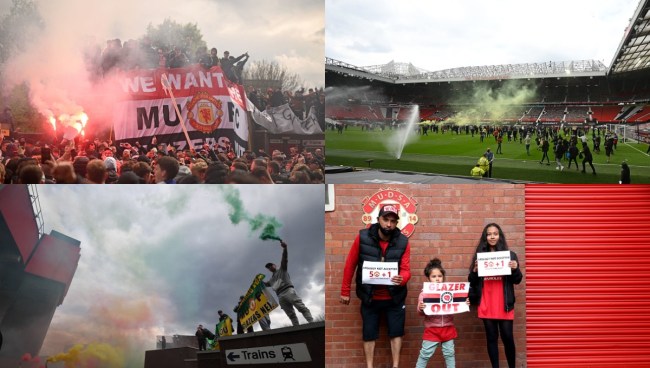 Manchester United fans — in protest of both the European Super League and the Glazer family’s ownership of the club — have broken into the team’s stadium, Old Trafford, delaying today’s game against Liverpool.

The initial breach of the stadium, which happened at around 9:30 a.m. EST, saw hundreds of United supporters, some visibly intoxicated and drinking alcohol, invade the pitch. Not only that but there are reports that one fan even broke into one of the locker rooms. At this time, neither Manchester United’s team nor Liverpool’s have arrived at Old Trafford.

BREAKING: Angry Manchester United fans are staging a protest against the club's owners after getting inside their Old Trafford stadium.

Timo Werner has been spotted in the pitch invasion at Old Trafford! pic.twitter.com/ri1OeXsPc5

The best part about fans getting inside Old Trafford is the strong message it delivers.

It truly shows the power of the fans and the unconditional love we have for this football club.pic.twitter.com/xSzY1FTVXN

Manchester United fans storm Old Trafford ahead of the match against Liverpool in protest of the club’s ownership 📸 pic.twitter.com/kfTJJ3MgD6

An amazing photo of Old Trafford. The Glazers and the world will be watching. #MUFC #MUNLIV pic.twitter.com/lQQ5rEayZ5

Protestors have also gathered outside of the Lowry Hotel in Manchester, which is where the players stay prior to games:

It's all going off outside The Lowry Hotel on this calm Sunday morning #mufc #Manchester #ManchesterUnited @BBCBreaking @BBCNews pic.twitter.com/HP5ZX1xZa1

Manchester United fans outside the Lowry hotel the team bus is waiting for the players to arrive #GlazersOut #mufc pic.twitter.com/0MwVBu9Tzn

The protest comes in the wake of the attempt to form a European Super League, which would have upended the entire international soccer pyramid. 12 of the world’s biggest soccer teams — including the “Big Six” English Premier League clubs (Arsenal, Chelsea) Liverpool, Manchester City, Manchester United, Tottenham — attempted to form their own competition that would have effectively replaced the Champions Leauge.

The backlash from fans not only caused the Super League to collapse within days of its announcement but has continued to boil over in the subsequent weeks, leading to scenes like this. According to reports, violence has broken out between protestors and police.

Mounted police now forming a kettle around a large section of fans. Missiles have been thrown by protesters. pic.twitter.com/OnZC2h4xaj

At this time, the Liverpool-Manchester United match — which was supposed to kick off at 11:30 a.m. EST (4:30 p.m. local time) and is widely considered to be one of the most significant soccer games in the world — has been officially delayed. There will certainly be questions asked of Manchester United and Manchester Police in the coming days, as the protest was widely planned and reported on in the days leading up to the game.