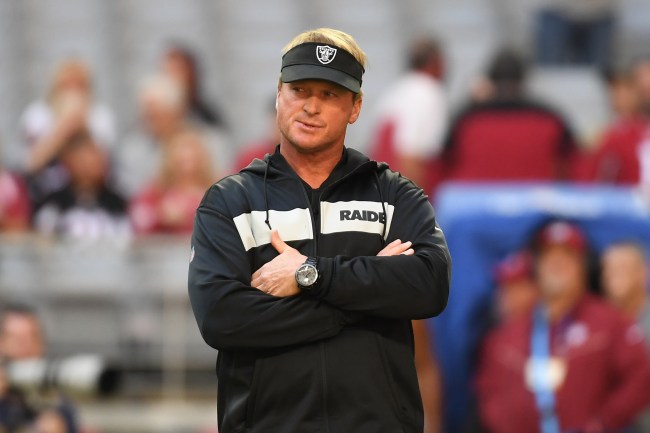 Jon Gruden has been around the NFL for a long, long time, so he knows the politics that goes into an offseason; especially when a team like his, the Oakland Raiders, are linked to a perennial All-Pro talent like Antonio Brown. But it’s what Gruden said late last NFL season that might actually help him land the disgruntled wide receiver, as rumors have poured out all over the Internet that Jon Gruden’s Raiders are the favorites to land Brown from the Pittsburgh Steelers in a trade.

While Jon Gruden’s doing what he can to get into Antonio Brown’s good graces this offseason, the Raiders head coach gave all-time praise of the wideout, saying that he’s the “hardest working man” in football. That’s a serious proclamation, with Gruden going next-level by putting Brown’s work ethic into legendary company, even dropping Jerry Rice’s name.

Here’s what Gruden had to say prior to a Week 14 matchup between the Raiders and Steelers, per Raiders.com.

“The greatest thing about this man is, I’ve told all our receivers: If you get a chance to watch him practice, you’ll see what unlocks the greatness in him. He’s the hardest working man, I think, in football,” Gruden said. “Hardest working player I’ve ever seen practice, and I’ve seen Jerry Rice, I’ve seen a lot of good ones. But I put Antonio Brown at the top. And if there’s any young wideouts out there, I’d go watch him practice and you’ll see for yourself why he’s such a good player.”

Whoa, Jon, can we slow this roll a little bit? Sure, Antonio Brown might work his ass off and is putting himself into the Hall of Fame conversation, but to say he works harder than Jerry Rice — who famously ran that hill as a way to stay in shape and separate the haves from the have-nots — might be taking it a little bit too far. Plus, when you consider Brown himself said he “doesn’t even have to play football,” it’s hard not questioning his passion for the game a little bit.

Jon Gruden and the Raiders are rumored to be trying to put together a “superteam” this offseason, which includes pairing Antonio Brown with Le’Veon Bell and incoming rookie quarterback Kyler Murray, and these comments definitely don’t hurt the chances of getting one of those pieces closer to reality. Still, Gruden’s comments seem a little over-the-top, but, hey, they might help him should Oakland land Brown in the long run.