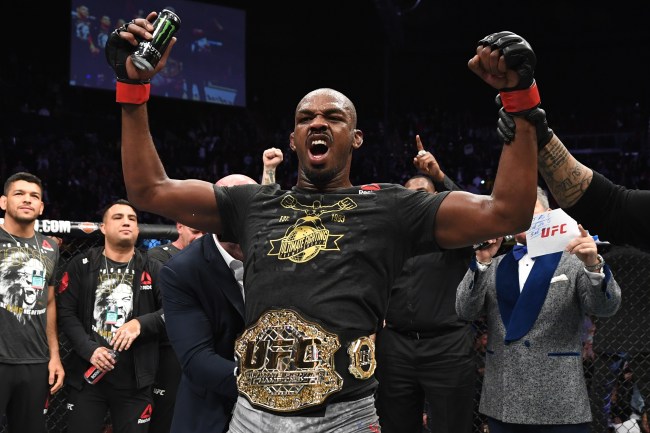 Jon Jones is one of the best fighters the UFC has ever seen, with the 32-year-old overcoming both professional and personal challenges to remain at the top of the MMA pyramid. Currently riding a 16-fight win streak, Jones (25-1-0) is prepping for his next opponent, going head to head with Dominick Reyes (12-0-0) at this weekend’s UFC 247, which will be held in Houston’s Toyota Center, and can be streamed exclusively on ESPN+.

After earning a split decision at UFC 239 over Thiago Santos in his last fight, Jones knows that he’s now starting to be in the conversation of the greatest of all-time — an honor that every athlete seeks out, but few can actually claim in their sport. From Michael Jordan in the NBA, to Tom Brady in the NFL, could Jon Jones really be the GOAT in the UFC? He think so; but it comes with a big caveat.

While there’s no debating the dominance that Jon Jones has displayed inside the Octagon over the course of his career, the fighter himself knows that it’s going to take more than just holding his current title belt; the UFC Light Heavyweight Championship.

During an appearance on ESPN‘s First Take, Jones talked about his place in UFC history, revealing his thoughts about what it’ll take for him to really be considered the GOAT in the sport. According to Jones, to stake his claim, he’ll need to win another title belt in a different weight class to put that debate to rest.

“In order to put a lot of this pound-for-pound or who’s the greatest conversation to rest, I’m going to have to maybe obtain a second belt in a different weight class. I think that’ll really set me apart from a lot of guys. The move is inevitable. I’m only getting better as a professional. I think I’m at a place, I have the team around me now that can get me to that weight class in a safe and healthy way, I’m excited for when it does happen.”

It’s an interesting take from the current Lightweight champ, and might make some UFC fans wonder if Jones would be up for bulking up and fighting in the heavyweight class. According to the 6’4″, 205-pound fighter, he believes his upbringing — which includes wrestling with his two NFL brothers, Arthur Jones and Chandler Jones, would benefit him against bigger UFC fighters.

“I see nothing but good things. I’ve been competing against my brothers my whole life who are both bigger than me, both Super Bowl champions, and I feel like I’m ready for that lane. Light heavyweight fighters, we are truly the most versatile while being strong, fast and athletic. It’s the most dangerous weight class in my opinion. Guys big enough to knock you out but still more athletic enough and agile enough to do some really extraordinary things. It’s a tough weight class. In a way, me moving up to heavyweight could be easier for me cause I’m just used to a much faster pace of fighting.”

It’s great that Jones is talking about his legacy and all, but he’s first got to worry about a highly-anticipated bout with Reyes at UFC 247 first, as a loss would ruin any discussion of being the GOAT of UFC.

In addition to the aforementioned UFC light heavyweight fight at UFC 247 between Jones and Reyes, the fight card features a co-main event between Valentina Shevchenko (18-3-0) vs. Katlyn Chookagian (13-2-0) in a Women Flyweight showdown that’s sure to impress. With Shevchenko currently holding the Flyweight title belt, but Chookagian currently being ranked No. 1 in the UFC women’s flyweight rankings, it’s sure to come down to an epic finish between the two at UFC 247.

How To Watch UFC 247 on Saturday, February 8

Add in some of the other fights on the main card, prelims and early prelims, and snagging yourself an annual subscription from ESPN+ to watch UFC 247 is more than worth it. And remember, an annual membership costs just $84.98, while the pay-per-view itself costs $64.99, so it’s a no-brainer to get the entire streaming package for the next 13 months — which includes tons of extra sports content, too.

While the UFC 247 main event, Jon Jones vs. Dominick Reyes, is getting most of the attention, as mentioned above, there are plenty of gripping bouts on the fight card. Here’s a look at all the matches that will be streaming on ESPN+ from the event — which can be all yours for only $84.98.

For those mega UFC fans, remember that ESPN+ is the exclusive home for all the action inside the Octagon. So, if you’re already planning on watching UFC 247, you might as well score yourself all the dope content the streaming service offers. Here’s a quick glimpse at the programming on ESPN+ that you’ll get to watch all the hard-hitting action.

Remember, a yearly plan of ESPN+ with UFC 247 is only $84.98, so now’s the time to get yours so you never miss any of the top-notch UFC or sports content always available at your fingertips.