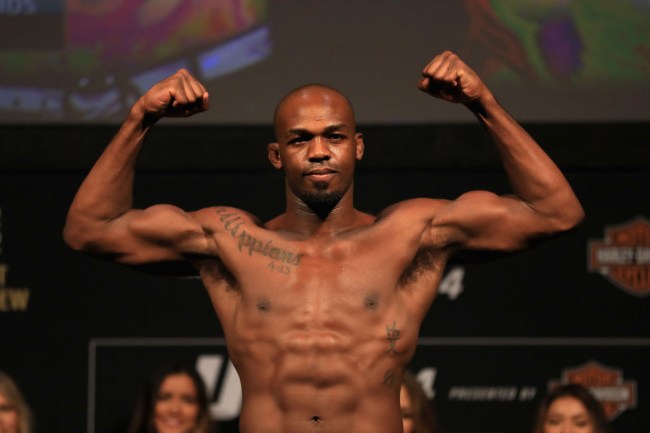 Jon “Bones” Jones had an eventful presser for his upcoming headlining fight against Alexander Gustafsson at UFC 232. The two-time UFC Light Heavyweight Champion blasted a Swedish female reporter for prying at him about his positive drug test on December 9th, telling her that she sucked and was bad at her job.

The 31-year-old was also asked about a viral tweet he posted on Christmas Day in which he asked his 2+ million Twitter followers for suggestions on a walkout song for Saturday’s main event fight.

Many of the song suggestions devolved into jabbing Jones about his suspensions for banned substances, suspensions that robbed him of two-and-a-half years of his prime and several million dollars.

Some responses were objectively hilarious:

Oops i did it again pic.twitter.com/jRuDNHoI71

Shaggy “it wasn’t me”

Travis Scott – Drugs you should try It

During Thursday’s UFC 232 press conference in Los Angeles, For the Win’s Andy Nesbitt asked Jones if he saw the tweets ribbing him and he said, with a laugh:

“I heard all types of jokes – Oops, I did it again, Britney Spears. I picked a really great song. I think the lyrics to the song are very fitting. You guys are going to have to watch UFC 232 to check it out. Not a hint, no. But it will be extremely fitting.”

Hmmm. I’d guess that the “fitting” song Jones chose would be a song like Tupac’s “Me Against The World” or OutKast’s “So Fresh, So Clean.” I’d be willing to throw money on it.