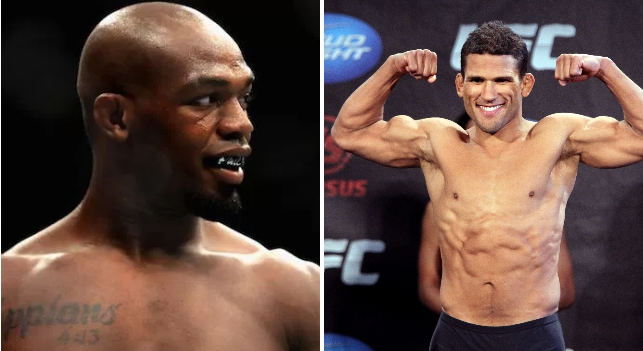 Former UFC light heavyweight champion Jon Jones and ex-lightweight contender Tyson Griffin have not liked each other for quite some time now. Their beef started back in 2014, when Jones declined Daniel Cormier’s challenge to a 205-pound championship fight. Tyson basically said Jones was quick to venture down the path of least resistance to become champion, and Griffin eventually outed Jones’ private messages in response.

Well, the less relevant Tyson has gone out of his way yet again to punch up at Jones, this time jabbing him for losing a six-figure deal with Nike following his role in the brawl with Daniel Cormier in the lobby of the MGM Grand Garden Arena a few years back. In the same tweet, Tyson managed to run his mouth about Conor McGregor and Jon Jones.

Well there goes @TheNotoriousMMA lossing his @BurgerKing deal faster than @JonnyBones lost his @Nike deal!! Or did he?? More💰more problems 🧐🤔

Buckle up, because things get heated FAST.

@TysonGriffin my dream was to be sponsored by Nike as a high school wrestler, became an adult and made it happen. Even had my own sneaker which sold out within a day.

@TysonGriffin What ever happened with your Nike deal, I don’t remember. I’ll wait…

@TysonGriffin You can tell by the tone of your tweet that you’re happy Connor may be losing his deal. Disguise yourself as an MMA coach or a MMA personality, I just see a bitter bitch who’s the size of my dick

“Bitter bitch who’s the size of my dick.” Bones got bars!

Griffin responded by accusing Jones of making it about himself, even though Griffin fired the first shot. He then publicized private messages Bones sent to him back in 2014. Check them out below.

I may have took a jab @TheNotoriousMMA during his rampage but just like that man tried to steal the spotlight @JonnyBones is trying to make this all about him and apparently it’s too soon to joke about his nike deal.

2 years ago I kept this private because I almost felt bad for @JonnyBones but now I’ll just let you all judge for yourselves. pic.twitter.com/s4eZfv8M25 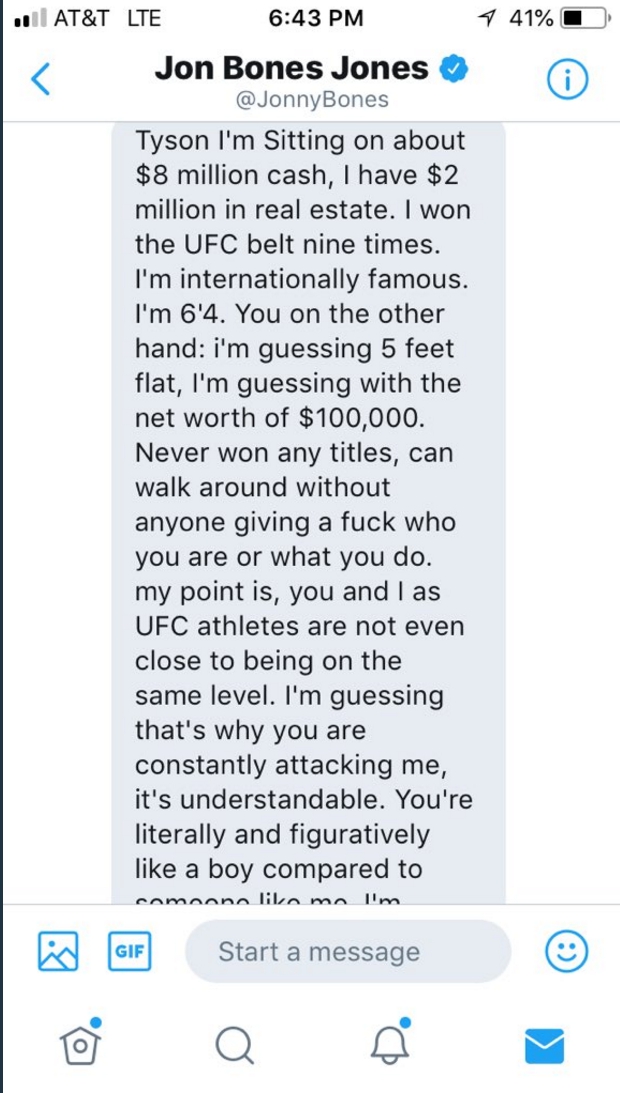 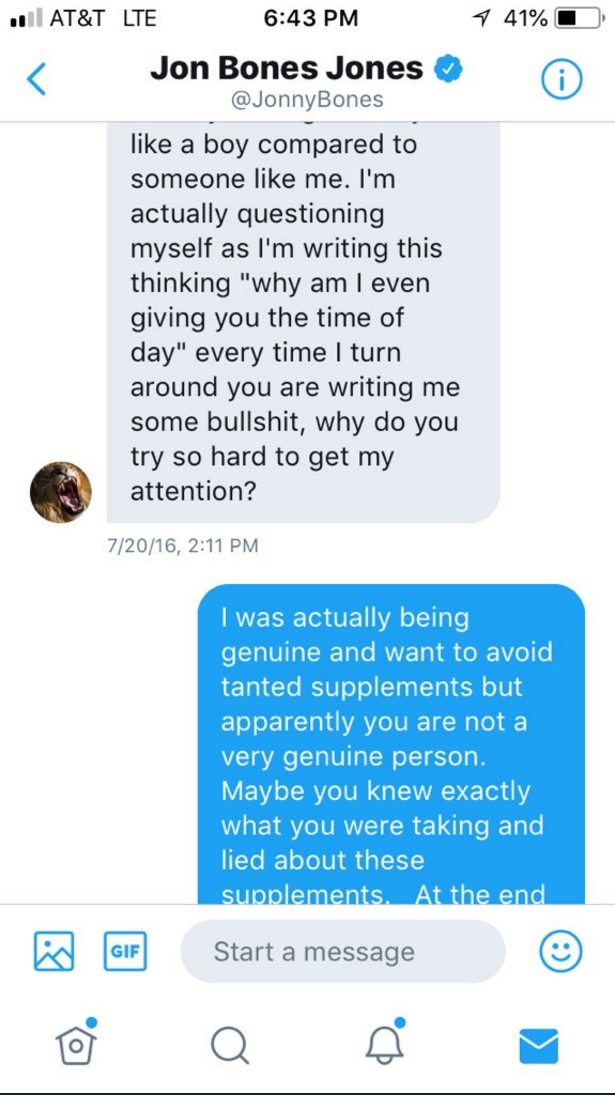 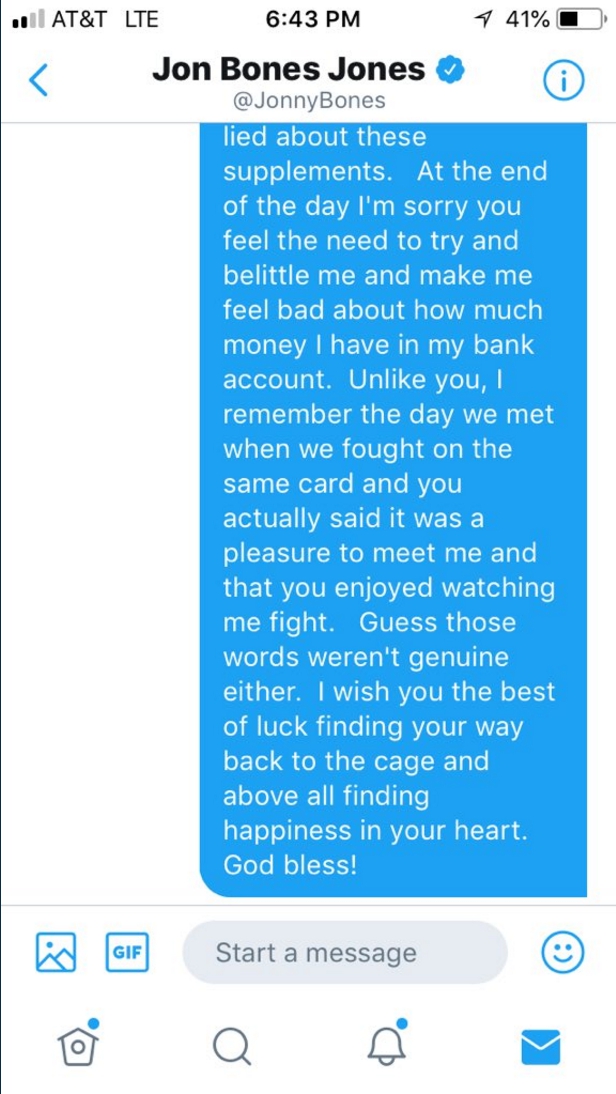 @TysonGriffin It’s hilarious that you reposted our private messages, I meant every word I said. At first I thought your hatred was DC related but now I’m starting to think you are just an envious little bastard.

@TysonGriffin At the end of the day, I’m not going to lie, it’s pretty fun shitting on you. Just because I’m the bigger man doesn’t mean I have to sit back be quiet and listen to your cyber attack.

@TysonGriffin hope this has gained you a few more followers. I’m sure you were reply to my last message. Be quiet for a while and come out with more hatred in a few more months. It’s your pattern. You’re cute, my little pet 😘

@TysonGriffin last thing, don’t call me brother. My brothers are over 6 feet and champions… Hitting me with that soft shit after getting verbally body bagged. Stop throwing tomatoes from the sidelines bro, you’re whack

Thanks for the hate aka love @JonnyBones we are all one my brother. Just keep trying to be a better role model and focus on being a “Great Champion” No one is perfect but winning and money isn’t everything. You have taught me that 💯🙏🏾

Typically I’d say that if anyone who tries to big time someone else over the money they have in the bank is a huge tool. But I make an exception in this case, for a few reasons. In their longstanding feud, Jones has never initiated the beef with Griffin. Griffin is always the one taking cheap shots and then playing victim. Fuck that. Also, if you’re calling someone out for losing endorsement money, don’t cry ‘money isn’t everything’ when they remind you that they could buy you.