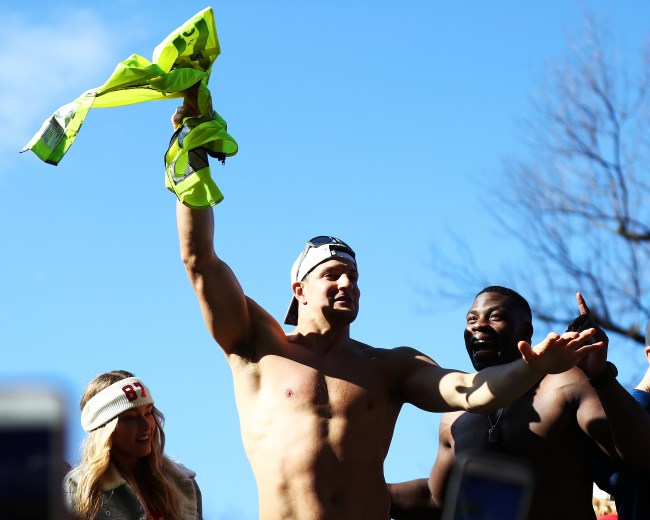 In case you were sleeping under a rock yesterday, former New England Patriots tight end Rob Gronkowski is coming out of retirement to join Tom Brady on the Tampa Bay Buccaneers, pending a physical. The Bucs will send their 4th round 2020 NFL Draft Pick to the Patriots in exchange for Gronk and a 7th Rounder.

I’ve heard a lot of disgruntled Patriots fans (mostly my northeast family) saying they should’ve gotten more but the fact remains that Gronk was going to stay retired and wouldn’t have played this season unless they traded him to Tom Brady’s Buccaneers so they at least got something out of the deal.

Gronk wears #87. There is A LOT of branding with the NFL’s biggest stars and it’s important for them to keep their numbers for a lot of reason. Tight end Jordan Leggett previously wore #87 for the Bucs and joked on Twitter that he’d sell #87 to Gronk for a cool million dollars.

Hahaha I thought the laughing face made it clear. But I guess not…

If there was any doubt, Bucs have changed TE Jordan Leggett's jersey number to 81 on their online roster, freeing up the familiar No. 87 for one Robert James Gronkowski.

Some people missed the joke despite his emoji but it was all settled anyway shortly thereafter when the Buccaneers transferred the number to Gronk on their website. If Tampa Bay Buccaneers tight end Jordan Leggett was smart he would’ve tweeted at Rob Gronkowski that he’d sell him jersey #87 for $69,000. That would’ve gotten Gronk’s attention immediately and it would’ve been news picked up by every sports media outlet in America because it’s not like there’s much else going on.

Meanwhile, as a Tampa Bay Buccaneers fan, I’m now convinced more than ever that we won’t see a single down of NFL this season. We are like Icarus flying too close to the sun. Things are going way too well for us. Bucs fans aren’t accustomed to this level of optimism, at least not in the past 15 or so years. The team is certainly excited about the news though:

“I want to spike my Clorox wipes and my sanitizer in my house right now.”

Plenty of fans had jokes about the number debacle:

Gronk rolling up to get his number pic.twitter.com/nptIT62GVt

This can only be resolved by Cage Match.

I propose trading your #87 for his @WWE belt.

Jordan – A tip from a Bostonian, Gronk doesn’t care about numbers unless it’s a number to a good party. Enjoy the fiesta!

It’s probably cheaper to cut you 😂😂😂

I have to think that Gronk will hook Leggett up with something, assuming both are on the roster, before the season starts. If Gronkowski isn’t aware that the number was taken already I’m sure he’ll see the tweets and send his dude a gift of some sort.