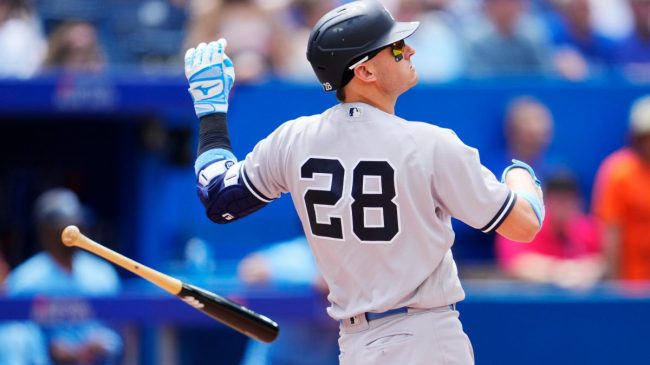 The former Blue Jays star is now a member of division rival New York, and he’s quickly earning the title of Most Hated Man in the city. In a matchup between the Jays and Yankees, he’s been booed on numerous occasions by his former home fans.

It started in the top of the first inning after Donaldson was plunked by a fastball. The third baseman could’ve just taken his base, but instead, opted to react in frustration.

He slammed his bat to the ground, nearly snapping it in half. The reaction landed outburst a loud of boo-birds from the home crowd.

Josh Donaldson wasn’t happy about this hit by pitch 😬

But Donaldson was far from through.

In his next at-bat, he smacked a two-run homer that put the Yankees up 3-2. A bat flip, grab of the jock strap (towards the Blue Jays dugout), and long gaze at the home run leaving the ballpark grabbed more attention from the Toronto fanbase.

Donaldson was booed all the way around the bases.

Folks on social media are talking about the New York star.

Baseball fans on Twitter were quick to note Josh Donaldson’s showboating. The third baseman can’t seem to help himself from being the bad guy, even in a city where he was once worshipped.

Josh Donaldson could so easily have stayed a beloved former Blue Jay but just can not help himself.

A little bat flip, a little backward jog out of the batter's box, a little post-HR dance with Joey Gallo.
Josh Donaldson enjoyed the heck out of his 6th HR of the year, while getting booed rounding the bases at Rogers Centre.

The Blue Jays would get the last laugh, though, posting a 10-9 come-from-behind win to get a game closer in the division race.