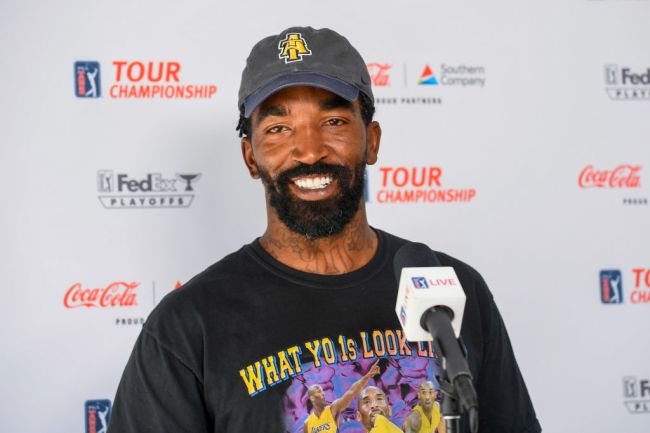 J.R. Smith has completed his fifth week of college and he’s absolutely thriving. The 36-year-old freshman went back to school at North Carolina A&T and is set to play Division-I golf for the Aggies.

He has been live-tweeting his experience at the HBCU in Greensboro, North Carolina and it has been extremely entertaining. The team even brought him Bojangles biscuits on his birthday and Smith was clearly loving them.

But if he’s not careful, he might put on the freshman 15…

Although his athletics are a big part of his college experience, Smith is most concerned with his academics. He is even inspiring others to go back to school and get their degrees.

You should for sure do it! Love being around the younger generation learning a lot from them https://t.co/YGzM3X5srr

Smith recently shared his goals in the classroom.

They are attainable, but quite lofty. The two-time NBA champion is chasing a 4.0 GPA and wants to have his name on the Chancellor’s list.

Through week 5 of school I’m proud to say I’m working towards a 4.0GPA goals of being on the chancellor’s list are in sight! pic.twitter.com/l3iLYMbozH

He was reminded, however, that building knowledge and skills is more important than a number on a piece of paper. Smith agreed.

Through the first five weeks, there have been nothing but positive updates from Smith in regard to his school work. You have to wonder whether he is like most college kids, where they only share the A and B grades with their parents and not the Cs, Ds, and Fs.

Either way, he is more stressed about his work in the classroom than he was on the court.

I’m so happy about this quiz. Man these joint be having me stressed tf out for real! I played in front of 20k for along time but taking a quiz by yourself pic.twitter.com/E3OeiHVKa7

But at this point, it looks like he’s crushing it academically. He has had at least two perfect scores on his African History quizzes.

75 of 75 on my African American History Quiz Today!!!!! pic.twitter.com/CPxfpGG8gZ

And Smith also got an A on his nutrition quiz on the day after his birthday.

46/50 on my Nutrition quiz 🔥🔥🔥🔥🔥🔥 Me going to the student center yo get @ChickfilA pic.twitter.com/xCFVtbnXYy

That’s how you come back after a Birthday! 🤲🏾🤴🏾

Regardless of what his grades looks like, Smith is loving college and is learning a lot. Perhaps even more than he expected.

My head is spinni from all this knowledge! pic.twitter.com/urbatzohsY

Everything about Smith’s return to college has been entertaining thus far, and we can only hope to get more updates as the semester and year continues.