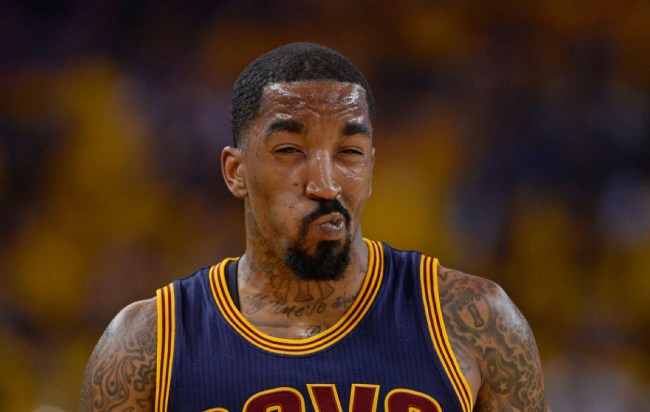 You’re probably well aware by now, but former NBA guard J.R. Smith decided to enroll at North Carolina AT&T at the start of the 2021 school year to earn a liberal art degree.

Smith is also a member of the golf team at AT&T and has provided some pretty great stories over the last year sharing plenty of school and life updates on social media.

The two-time NBA champion seemed to really enjoy his first semester as a college student and the hard work paid off as he earned a 4.0 GPA.

It appears his second semester may be a bit more difficult for the first, however, as he shared a tweet about his math class on Tuesday morning.

Smith asked the world who the hell put letters in math, and why, which means he went 36 years without knowing that algebra is a thing that exists.

Who the hell put these letters in math and why? 🤦🏾‍♂️ pic.twitter.com/gRQGe0xkSU

I’m going to assume that Lakewood and St. Benedict’s Prep, the two New Jersey high schools Smith attended, did teach students algebra back in the day. Smith was a little more worried about making the jump to the NBA than dealing with letters in math equations, however.

The majority of us out there who haven’t had to solve a math equation outside of an actual classroom were wise enough as teenagers to ask ‘why do we need to know this.’ Imagine being 36-years-old and incredibly rich, en route to a liberal arts degree, having to solve algebra equations.f

Best of luck to you, J.R. I’d like to say math gets easier in college, but it doesn’t, stay away from geometry and stats at all costs.