Julian Edelman Used To Date Jerry Rice’s Daughter Jacqui, Because Of Course He Did 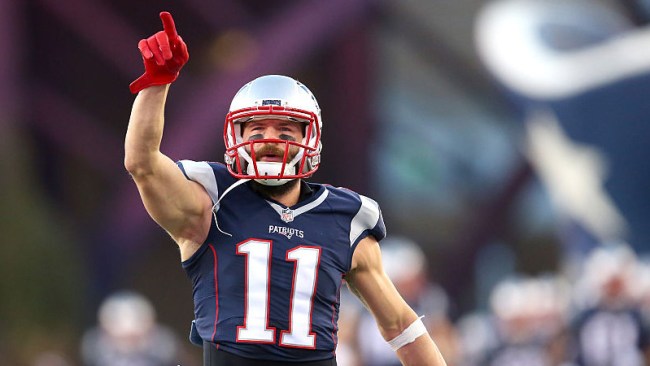 Remember last year how we told you that Jerry Rice’s lovely and talented daughter Jacqui Rice was planning on following her dad’s footsteps a little bit by signing up to play for the LFL? No? Well, where have you been? C’mon now…

Anyway, I figured that might be the first and only time we’d be talking about her here on this website. Her singing career has seemed to stall out, so unless she suddenly started dominating the LFL I figured that would be the last we’d hear of her.

Turns out I was wrong, thanks to Patriots wide receiver Julian Edelman writing a memoir called Relentless.

For you see, in Edelmen’s memoir Relentless, he reveals that at one point in his life he was dating none other than THE GOAT Jerry Rice’s daughter Jaqui.

Boston.com shared several excerpts from the book, including this one…

Julian’s high school girlfriend was Jaqui, a girl who he met in eighth grade. She lived up the street from him, so he’d usually ride his bike to her house, and then they would go to Taco Bell or play driveway basketball. But Edelman was terrified of actually going inside her house because Jaqui’s dad was none other than former San Francisco 49ers wide receiver Jerry Rice.

“He was a god to me,” Edelman writes. “The first time I saw him, we were shooting hoops and he came out on the front steps, no shirt on, all yoked up, gold chain, six-pack abs. I was shook, and I think that might have been the point Jerry didn’t really talk to me and never talked to me about football.”

Even after he had made the Patriots and came back to visit Jaqui following his rookie season, Edelman says Jerry didn’t acknowledge the game. They both attended the 2017 Kentucky Derby, so while at the horse race, one of Edelman’s Patriots teammates couldn’t help but make a comment.

“I hear Jules spent a lot of time at your house when he was a kid,” quarterback Tom Brady joked.

Edelman says Jerry laughed, though he’s not sure if he actually found it funny.

That Tom Brady, such a jokester.

Now as far as Edelman having the stones, even back in high school, to date the daughter of arguably the greatest NFL player of all time?

Doesn’t surprise me even one…little…bit.