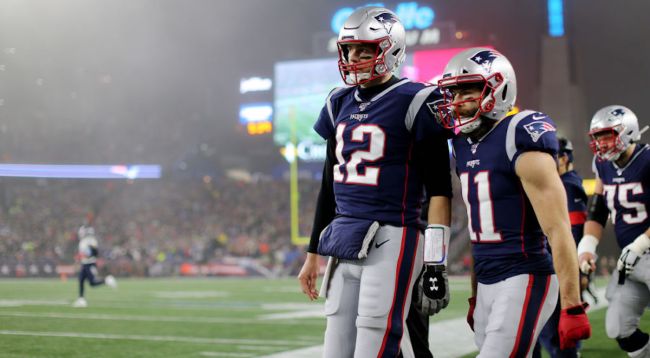 Given the suspension of Mike Evans and injuries to Chris Godwin and Julio Jones, the Tampa Bay Buccaneers decided to sign former Dallas Cowboys and Buffalo Bills slot receiver Cole Beasley to a one-year contract.

While Beasley has only been added to the practice squad (so far), that didn’t stop the topic from being brought up on a recent episode of Inside the NFL, which just so happens to feature Tom Brady’s (former?) New England Patriots pal Julian Edelman.

When the topic of Beasley’s new contract with the Bucs was broached, Edelman — albeit in a somewhat kidding tone — said he “didn’t want to talk about it” because he didn’t “get a call.”

Julian Edelman after the #Bucs signed Cole Beasley: "I don't want to talk about this… I didn't get a call." (from @insidetheNFL)pic.twitter.com/qXjD52cWXQ

Now, while I’m not a body language expert, I was a communication major at Rutgers (and a psychology minor, LOL!), and I do remember learning that about 90% of human communication is nonverbal. And let me tell ya, Edelman’s body language certainly suggests actual annoyance, at least to me. Combine that with the theory there’s truth at the center of every joke and you have yourself a salty Julian Edelman.

To be fair, Beasley is three years younger than Edelman, who had quite a bit of injury issues towards the end of his career. Conversely, though, Edelman absolutely had the better overall career and likely has better, already built-in chemistry with Tom Brady.

Heading into Week 3 with a 2-0 record following impressive, albeit low-scoring, victories over the Dallas Cowboys and New Orleans Saints, Brady and the Bucs will host the 1-1 Green Bay Packers — who have been experiencing their own well-documented issues at the wide receiver position this season — on Sunday.