Another LSU Player Confirms Odell Beckham Jr. Handed Out Real Money At The National Championship But Says He Donated It To His Church 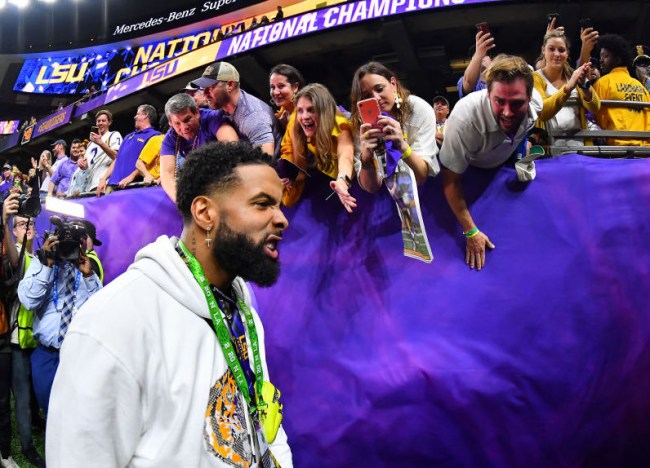 Last month, 76,885 people packed into the Superdome to watch LSU take on Clemson in the College Football Playoff National Championship—including former Tiger Odell Beckham Jr., who made the trek down to New Orleans to watch his team ultimately take home the big prize for the first time since 2007.

The wide receiver quickly made his way onto the field to join the celebration and, in the immortal words of Sergio Dipp, looked like he was having the time of his life as he congratulated the players at his alma mater on their incredible season by pulling out a giant wad of cash and passing out bills like a guy in Times Square trying to convince tourists to come to a “free” comedy show.

The Brown also joined LSU in the locker room and made the sage decision to slap a security guard on the ass, and when he woke up the following morning, he found himself dealing with a couple of headaches (in addition to the one he may have had if he was hungover) after police issued a warrant for his arrest thanks to his vicious “assault” and LSU announced they were working with the NCAA about potential violations stemming from him turning into a human ATM.

The school initially made a laughable attempt to cover its ass when it tried to claim Beckham had actually been passing out novelty bills before Joe Burrow snitched and confirmed what everyone already knew by saying it was actual money.

Now, according to Yahoo Sports, another Tiger currently making the transition to the NFL has ignored the advice that the members of the Dipset crew doled out in the mid-2000s when wide receiver Justin Jefferson spoke with reporters at the NFL combine on Tuesday and confirmed Burrow’s admission but said he donated his share to his church after speaking with the NCAA.

Justin Jefferson donated his OBJ money to his church, he said, after talking to NCAA compliance folks. “We knew we shouldn’t have done it,” he said. “It was in the heat if the moment” that the Browns’ receiver handed him cash on the field after the NCAA title game. pic.twitter.com/5ojQoCmJZ8

It’s unclear exactly how much money Jefferson received, but based on the video of the exchange, it looks like it was a few hundred dollars.

Based on a few scouting reports I’ve looked at, it seems like Jefferson is slated to get picked up in the first couple of rounds of the draft as things currently stand so something tells me he’ll be just fine.