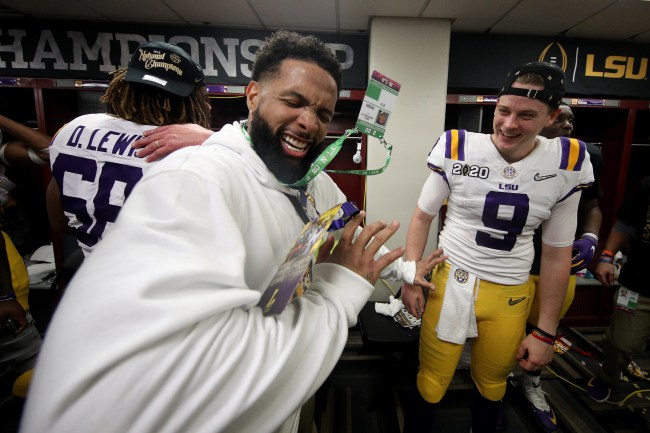 Odell Beckham Jr. really loves his university, guys. While the former LSU Tigers wide receiver has touted his school more than a few times on social media since leaving for the NFL — where he’s become one of the most flamboyant and polarizing athletes on the planet — OBJ took things to a whole new level following the Tigers’ victory over Clemson in the College Football Playoff National Championship Game with his celebration.

Love the #NCAA violation by @obj now Jefferson himself has to declare or face what is almost certainly a suspension. But I agree with paying athletes though! #CLEMvsLSU pic.twitter.com/bhO8RUW4Gy

As we’ve all heard by now, Odell Beckham Jr. wasn’t just going apeshit and turning up shots and beers, that we know of, but he was slapping New Orleans’ finest on the ass while with the team in the locker room — which may carry some serious consequences — as well as handing out cold hard cash to pretty much anyone in sight in LSU’s locker room. That whole cop incident sounds pretty damn serious, but the money to student-athletes isn’t any less consequential, as Beckham’s little random act of kindness could bite the LSU Tigers’ program in the ass.

Obviously, student-athletes can’t be paid, and, according to LSU quarterback Joe Burrow, OBJ was handing out real money to college players — something that was initially denied and thought to be fake money. Given the severity of the decision to hand out cash like Halloween candy to amateur athletes, LSU was forced to release an official statement regarding the incident. Take a look below at what the university had to say.

So, basically, in one of the finest moments for the LSU football program and university, Odell Beckham Jr. sort of ruined it by creating one major headache that could, potentially, result in suspensions to returning players, loss of scholarships if the long arm of the NCAA law finds this to be illegal, and, overall, brings more attention on the mercurial wide receiver than the Tigers team that just won the national title.

Look, it’s great that Odell loves his school and wants to celebrate with the current players on the football team, but, damn, he’s gone and F’ed things up after the most joyous event in a long time for the school. That said: Dear NCAA, let college athletes get paid, because this kind of thing is a headache for everyone.